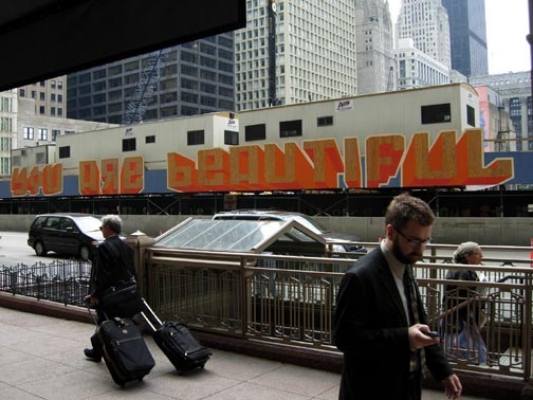 Do you remember the enormous mural with orange letters on plywood that spelled out “You are beautiful” on State Street? It ran along Block 37, Randolph to Washington, from 2006 to 2009. The installation, along with new pieces displaying the same, now iconic, slogan has moved inside to the Green Exchange. Throughout the month of February, “As you are: A Decade of You Are Beautiful” will imbue the raw spaces of the West Diversey office building with its optimistic mantra in a retrospective collection of works by numerous artists, including Matthew Hoffman, Nick Adam and Chris Silva.

The movement began in 2002 when Matthew Hoffman shared 100 You Are Beautiful stickers among friends. Requests for more stickers started flowing in, and a decade later half a million stickers have traveled around the globe. The message went from stickers to murals, to public installations and exhibitions here and abroad.

The Green Exchange show features the individual letterforms that once ran alongside the pedestrian walkway beneath the State Street mural. Filling in an adjacent, unoccupied office is a ten-feet-tall by one-hundred-feet-long You Are Beautiful constructed by Hoffman. The giant once adorned the Morton Arboretum and has since been painted yellow and blue by the students of Roberto Clemente High School. The zigzag of wood amuses with its lenticular effect of changing color depending on where the viewer is standing.

Since the campaign began, artists have been putting their own spins on the fifteen letters that comprise the simple but impactful message. Last summer at the Rebuilding Exchange, where reclaimed building materials are repurposed, design students from Camp Firebelly developed a fresh approach to the theme. Wood and metal scraps, bits of wire, glass and rubber tubing have transformed into a playful array of rough-hewn, handcrafted letters. Dawn Hancock of Firebelly is working to get these letters, many of which have the found-object feel of a Cornell box, eventually  installed in a prison. 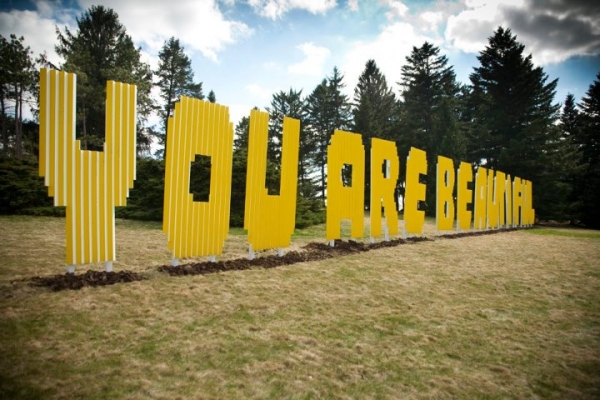 Hurray for Hoffman’s youthful idealism and the belief that small acts of kindness can make a difference in the world. You Are Beautiful is intended as a response to the commercialism that would have us doubt our attractiveness and self-worth. While the message affirms the beauty and complexity of each human being, it extends beyond the individual to the community, where entire neighborhoods embrace the idea that the words we speak become our reality.

People from all over the world continue to request the little silver stickers by mail. A collection of colorful YAB correspondence will be on display at the show. In celebration of the decade, Hoffman plans to create a You Are Beautiful book, including photos and stories about the campaign, for which he is currently trying to raise $25,000 through Kickstarter. (Mary A. Osborne)

“As You Are: A Decade of You Are Beautiful” shows at Green Exchange, 2545 West Diversey, February 7-March 7. Opening reception: February 7, 6pm-11pm.