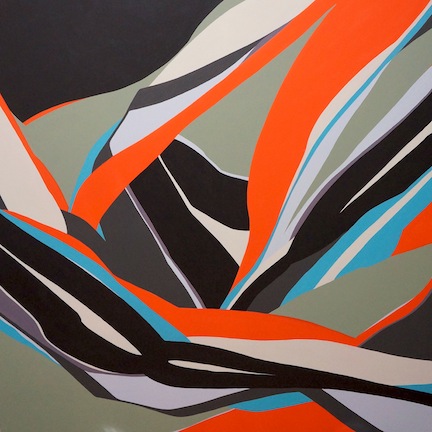 Despite the self-deprecating title, “Has Beens & Wannabes” accomplishes the hard task of gathering together the artists who once created the most significant graffiti art of the 1980s and nineties by showing their current studio-based work. The previous lives of these artists as graffiti writers manifests itself differently with each artist—many have moved on from their graffiti days, and a few even renounce their graffiti roots—and makes for a compelling tension.

It is challenging for an artist to transition from street to gallery, but at Zhou B Art Center we see mostly successful moves, particularly in their palettes that retain a keen sense of color interactions. Tyrone Whiteside is perhaps the most successful in maintaining the sense of the street in layered works that evoke the grit graffiti walls and the elegance of Julie Mehretu’s drawings. Victor Lopez’s “Untitled (White)” is an abstract composition that is vaguely reminiscent of Williem de Kooning’s “Excavation” with its pockets of color here and there, and Lopez’s ability to maintain the sense of velocity found in graffiti make it a standout. Elsewhere, Brian Evan’s drips and splatters of paint verge too close to Jackson Pollock’s signature style. In making work destined for the gallery there’s a danger for graffiti artists to become too slick, verging into the merely decorative. David Guerra seems to nearly fall into this trap, but his work “Ascend” pulls back. 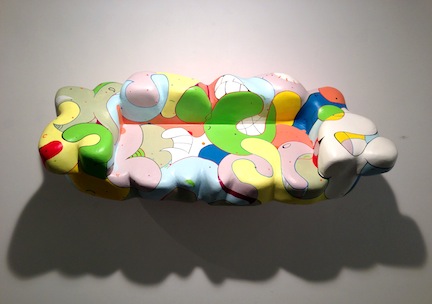 The fraught relationship the artists seem to have with their pasts as graffiti writers and graffiti itself looms like a shadow in the exhibition. It begs the question whether the renewed interest in street art and graffiti will finally lead to a sustained assessment of graffiti as an art form, in relation to traditional art history, by art professionals and institutions. Based on the wide influence of the art form, the art museums and curators will have to sooner or later. (Abraham Ritchie)

Great article, Abraham. I especially like your last line, “Based on the wide influence of the art form, the art museums and curators will have to sooner or later.” Very true. While I personally do not wish to create my art so that it destroys other people’s property, graffiti is an art form that shapes our aesthetics and interaction with public spaces and it needs to be recognized. By the way, I’m a Public Spaces Artist where I leave artwork to be found in public areas. My own personal rule is that I never want to harm the area where… Read more »