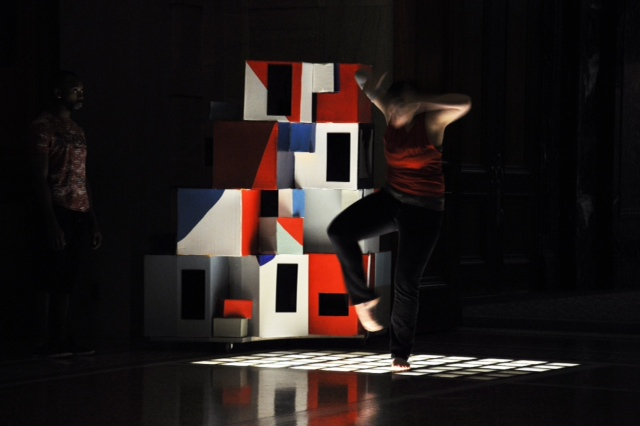 Watching Paige Cunningham and Anna Kunz’s performance, “One Careless Gesture Away From Destruction,” was like getting a six-course dinner when you’re expecting just an entrée. It was a feast of varied cultural forms that held together as a kind of conversation about creative production.

There were essentially three distinct shows on view: a sculptural tableau with a video component, situated right in the middle of Industry of the Ordinary’s (IOTO) retrospective exhibition; a vogue-ballet mash-up choreographed by Cunningham; and a voguing presentation and workshop, led by the Chicago chapter of the House of Ninja, a local queer dance collective, or “house,” in the parlance of the voguing community.

As the artists intended, Kunz’s installation felt like a performance space. Bisected by a red carpet that ran from the entrance, across a low, white platform, and up the opposite wall, which was covered in triangular shapes in hues of blue and red, the room seemed to anticipate some kind of action, as if, visually busy though it was, it needed another force to animate it. A large, mobile sculptural structure—about as tall as a person and made up of stacked cubes, painted with an intentional crudeness, complimenting its backdrop—looked like it could also be a theatrical prop. Resting patiently on one side of the white platform-cum-stage, it also contained a tiny monitor showing two men dancing—Cunningham’s contribution.

The men in the video, and the sculpture itself, made an appearance later that evening in performance in the Cultural Center’s Grand Army of the Republic rotunda that integrated voguing’s tight, calculated erraticism with modern dance’s mildly morose, apprehensive movements. While the dancers didn’t really engage the sculpture—it was mostly dragged around until it came to rest in a corner—they did respond to the rotunda. Their bodies mimicked the columns, and white light pouring though the illuminated glass floor tiles gave the dancers an eerie under-glow. 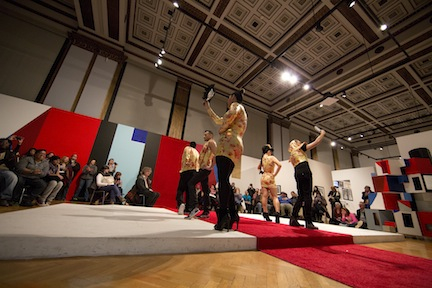 Lovely though Cunningham and Kunz’s choreography and installation were, they might have felt conceptually disconnected from IOTO’s overarching exhibition, were it not for the performance and subsequent workshop by House of Ninja, which brought the evening full circle and anchored Kunz and Cunningham’s work in the exhibition’s premise, i.e., IOTO’s interest in ordinariness. To be clear, it isn’t that voguing is somehow more mundane or commonplace than ballet or visual art. Rather, by involving the audience—by getting seasoned dancers and curious dabblers moving together on the stage—the House of Ninja closed the gap between audience and the hermetic space of art. In that sense, the evening moved from viewers encountering the isolated art object, to witnesses experiencing a time-based, immersive event, to participants embodying the creative process as they tried voguing for themselves, appropriating, per the workshop leader’s instructions, mundane movements from their everyday lives, such as washing dishes or grocery shopping.

In an exhibition that, from its opening last August, has continually felt messy and unfocused, eliciting audience involvement in a caustic and even aggressive manner (IOTO’s “Narcissism Chamber,” for example in which viewers watch themselves on a video monitor while they listen to a song about self-admiration) it seems that IOTO’s retrospective’s strength all along has been in opening up a collaborative, pedagogic space for other artists, resulting in an unfolding chain of cultural output, from artists established enough to warrant their own retrospective, to those a little more, if you will, ordinary. As I zipped up my coat to leave, I watched people participating in the workshop. Many of them were incredibly skilled dancers. As they took turns, each intermittently jamming on the low platform and joining the circle of spectators around the stage, they made it clear how fuzzy the line between ordinary and extraordinary can be. (Katie Waddell)

Through February 17 at the Chicago Cultural Center, 78 East Washington.