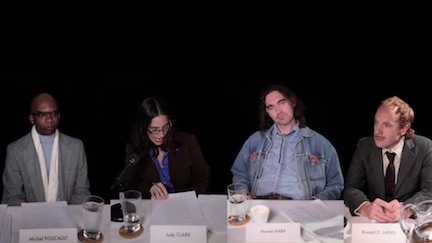 It was something of a spectacle. In 1975 the American counterculture gathered at Columbia University in New York for a symposium on the subject of madness and prisons. “I didn’t realize it at first, but I was looking for a way out of academia,” Sylvère Lotringer remembers. Professor of French literature and philosophy at Columbia and editor of the avant-garde journal Semiotext(e), Lotringer organized the “Schizo-Culture” conference as a way to discuss the practice of torture conducted in psychiatric and penal institutions. He invited a medley of street and academia, grassroots activists and radical philosophers, for a colloquium that itself dissolved into madness. “Are you a writer or are you a militant?” Michel Foucault asked the mob of more than two-thousand participants. “I think that question is passé.”

“I was living in New York in 1975 and was completely oblivious to this conference,” says Patten. It was only years later that she learned of the strange event from her friend, the panelist Judy Clark. “We were both members of the revolutionary May 19th Communist Organization, a descendant collective from the Black Panthers and Weather Underground, devoted to the liberation of political prisoners.” The two women remained close after Clark was imprisoned for seventy-five-years-to-life in the Bedford Hills Correctional Facility for her role as a getaway driver in the 1981 Brink’s robbery that left three people dead.

It was Clark who sent Patten the xeroxed transcript of the forgotten 1975 panel. “I’ve had it on my shelf for years and knew I needed to make a project,” explains Patten. “Time has only made it more pressing and relevant.”

Acting on the fringes of the left and on the fringes of the art world, Patten describes her art practice as driven by deeply felt political ideas, as well as the desire to address the contradictory worlds of politics and art. In a 2011 publication, “Revolution as an Eternal Dream,” Patten reflected on the change in political fervor and the waning legacy of 1970s activism: “This is a continuing dilemma—confronting the painful truth that despite the risks and the sacrifices, the bravado and extremism, and the dire consequences of our political project, so much of our work, our efforts and, more recently, our political prisoners, are invisible and seemingly irrelevant to contemporary social movements in the United States.”

“The role of the intellectual,” argues Foucault, played in Patten’s remake by DePaul professor of philosophy Darrell Moore, “is to make apparent forms of fascism which are unfortunately not recognized or too easily tolerated, to describe them, to try and render them intolerable, and to define the specific form of struggle that can be undertaken against them. Darkened by the contemporary ghosts of Guantanamo Bay, Abu Ghraib and Bagram, “Panel” reopens the 1975 debate on torture and challenges viewers to confront what we might otherwise prefer to ignore. (Annette Elliot)