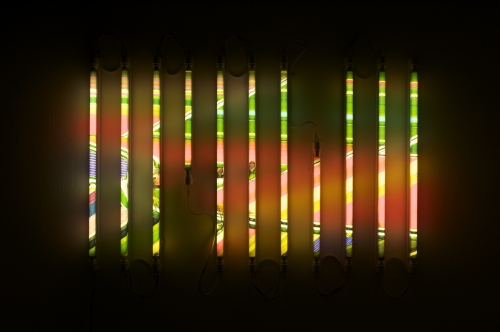 Joseph Beuys once declared that Holland’s unique light had lost its radiance around the 1950s, thus ending a signature period of visual culture immortalized in the artworks of Vermeer and Rembrandt. It’s debatable whether Beuys’ comment was a sociopolitical allegory (Holland drastically modified its landscape at the time) or he seriously contended that a change in the chemical content of the Dutch atmosphere had adversely affected the quality of Dutch art. Jeroen Nelemans seems to have rediscovered the glow. In his first solo exhibition at The Mission, the Chicago-based artist of Dutch heritage presents four series of works that deal with a twenty-first-century lighting design: LEDs, computer screens, interior bulbs, and the strange effects of their admixture.

One of Nelemans’ great successes is the ability to create work intimately tied to his personal biography, with an end product that doesn’t divulge all the narrative details. In untitled light-objects numbered 1, 2 and 3, geometric designs painstakingly incised from a black panel reveal small LED lightbulbs sparkling beneath, suggesting constellations in the night sky or a celestial pan-shot from “Star Wars.” In actuality the laser incisions in this series trace Google Map lines of Nelemans’ hometown in the Netherlands, famous for being headquarters for Philips, the electronic company where both of the artist’s parents worked. 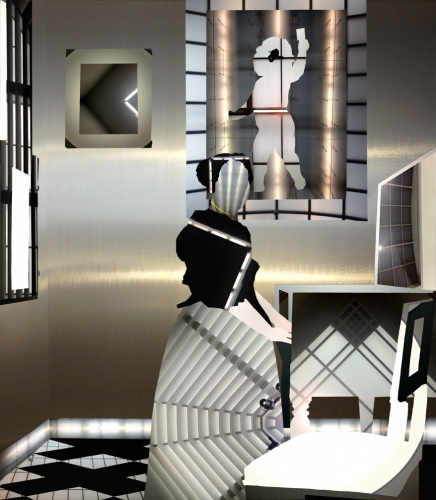 Amid moiré pattern abstractions of Turner landscapes and LED-tube landscapes, a series of light-boxes uses photographs of art-museum lighting as collage fabric to reproduce paintings by Vermeer, the quintessential Dutch master of light. The task seems simple enough: cutting and pasting pre-existing images to Photoshop to create pre-determined compositions. However, Nelemans’ manipulation of collage to recreate Vermeer expands the possibilities of a flat lightbox, his support medium.

Provoked by Beuys’ haughty claim, director Pieter-Rim de Kroon (whose past work includes a documentary on James Turrell) has a new film project investigating what happened to Dutch light, and while we may need to wait to see the results, Nelemans’ current exploration adds to the intriguing cultural myth. (Anastasia Karpova Tinari)

Through February 23 at The Mission, 1431 West Chicago.