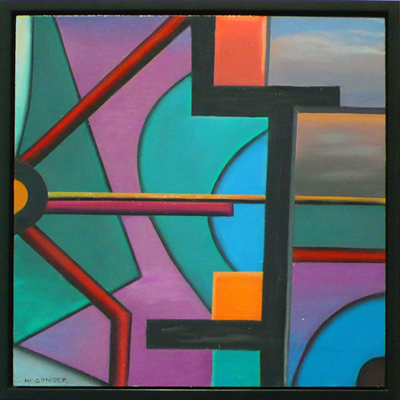 This beautiful exhibition is a trip to the ivory tower. Representing the severe discipline of the mathematical models of the hard sciences are the geo-form paintings of William Conger, professor emeritus of the Department of Art Theory at Northwestern University. Representing the semantic psychology of the contemporary humanities is Vera Klement, professor emerita from the Department of Visual Arts at the University of Chicago. One may ask whether the sciences and the humanities really are at their best under the same institutional roof. But, aesthetically, these two artists definitely complement each other.

Conger’s work has always been masculine as he explores, measures, captures and flaunts his mastery of space. A recent wall-size painting feels cluttered and uncomfortable in comparison with a 2004 painting above the sales counter that demonstrates how he used to successfully map a path through a larger format. Over the last year, however, his pictorial energy has intensified within the smaller twelve-by-twenty-inch squares that he has filled with dynamic patterns barely constrained by their borders. Their logic of design seems at the edge of comprehensibility, making them at once intriguing and annoying. This might also describe many attempts of even the smartest human brains to understand natural phenomena, from atoms to galaxies. 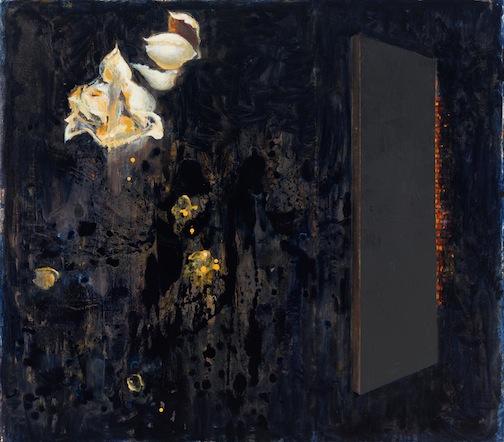 Klement’s paintings go in the opposite direction, looking inward instead of out. And, whereas Conger presents well-crafted surfaces of precisely defined edges, thicknesses and tones, Klement seems to be working with blasts of insight—eureka moments of understanding where for a flashing instant, outside and inside are one. It’s as if the act of comprehension itself is being comprehended, and judging by her recent work, she’s now a few steps closer to enlightenment. The earlier pieces in this show feel haunted, but the recent ones have the raw excitement of childhood discovery.

The two artists, now in their seventies and eighties, have gotten stronger with age, and the entire show is a tribute to the academic institutions in which they spent their entire lives. But looking back over the history of art, I do get more thrilled by work made for the worldwide priesthoods and elites who demanded convincing belief rather than puzzlement. (Chris Miller)