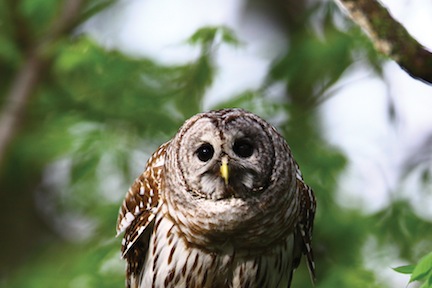 In an expertly and elegantly curated exhibition that serves as a model for the presentation of wildlife photography, Chicago shooter Jerry Goldner introduces us to nine widely different species of owls—most of which he caught in our sweet home of Illinois—in close-up color images that provide us with an intimacy with the fable creatures that we would never get otherwise. Using a 600mm lens and an extender, Goldner, an environmental activist, never gets close enough to his prey to let them know that they are under surveillance, which is why his subjects show us who they are on their own. Since owls are nocturnal, which has added to their myth and mystique, Goldner is to be commended for his persistence and his sharp eye in being able to encounter them in daytime. Goldner’s banner images are his many full-frontal headshots; taken as a whole, they show the panoply of owl moods, from repose to grim determination. Meet the Great Horned Owl merging with the bark of a tree, and looking meaner than any junkyard dog that you have ever seen, who specializes in gobbling up big game like rabbits. (Michael Weinstein)