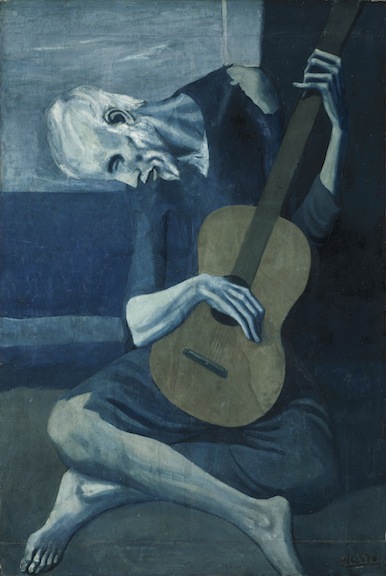 In 1926, the Art Institute of Chicago was the first American museum to place a painting by Pablo Picasso (“The Old Guitarist”) on permanent display, so it’s a bit surprising that forty years after his death “Picasso and Chicago” is the first major retrospective for what the museum’s director calls “the most transformative artist of the twentieth century.” The current show is mostly items from the museum’s own collection, enhanced by several loaned artworks from private Chicago collections. But with more than four-hundred pieces to draw from, it still offers a memorable stroll through that exceptional artist’s seventy-year career.

An encyclopedic museum like the Art Institute is the perfect place for it because Picasso was an encyclopedic artist. Picasso-relevant displays have been scattered throughout the museum to remind us of his wide-ranging eye. He borrowed from his older contemporaries, like Rodin and Cezanne, as well as historic European painters from El Greco to Corot and world art from Africa and Polynesia (though he had little use for either South or East Asian). The artist seems most comfortable with historic art of his own Mediterranean homeland, i.e., Greco-Roman classicism, and his greatest achievement, at least for me, are his line drawings illustrating Ovid’s Metamorphoses, sumptuously laid out in a gallery-long vitrine. 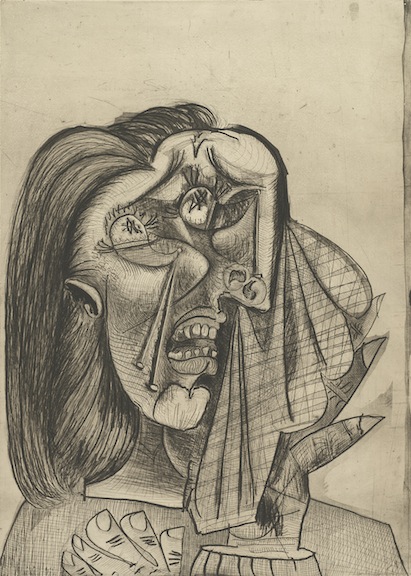 That man could draw! You can see from his very earliest marks on paper why this was one young artist who never had to drive a delivery truck or wait on tables. He doesn’t go for depth of volume, but his line manages to capture both character and tension, and when he chooses, it fits seamlessly into overall design.

Of course, he could also paint, and that’s the shortcoming of this exhibition, limited as it is to mostly the museum’s own collection. The two major paintings from Philadelphia that traveled to Chicago for this show are not hanging in the exhibition proper but over in the Modern Wing, perhaps because they would only remind us of what is missing.

There’s no way that this much Picasso can be anything less than fascinating. It’s a trip through art history, especially the early twentieth-century avant-garde, and the artist’s vigorous, satyr-like personality is as endlessly appealing as it is repellent. But this exhibition has prioritized the history of Picasso in Chicago’s collections. Since the artworks have not been grouped by collector or date of acquisition, we can learn very little about those collectors. So, “the story of this unique 100-year relationship” is just an exercise in civic self-grooming that shows just how badly we need it. (Chris Miller)

Through May 12 at the Art Institute of Chicago, 111 South Michigan.