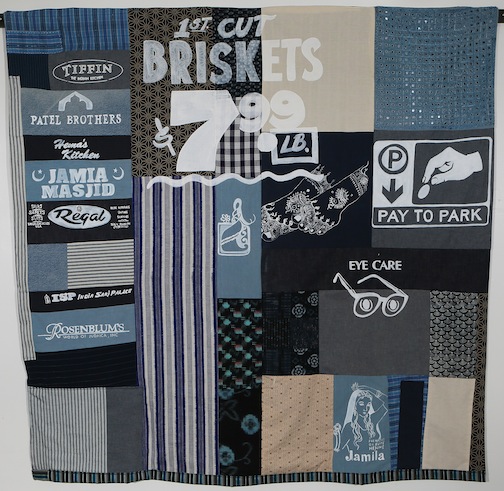 Applied to a contemporary art exhibition, the saying about a tree falling in a forest might go something like this: If an artwork’s political or ideological import isn’t palpable in the work itself, does it have any repercussions? If the viewer can’t sense it, is it really there at all? Such questions have become increasingly important as artists who engage global capitalism and its discontents make the ethical dimensions and political ramifications of artistic production integral to their work, as do Shelly Jyoti and Laura Kina.

Jyoti a textile artist, and Kina, primarily a painter, tackle identity politics and post-colonialism through their respective mediums. They teamed up for “Indigo,” a collaborative exhibition of work featuring that particular murky shade of blue, named for the natural dye from which it’s derived. As the exhibition text explains, indigo has a rich, layered cultural and socioeconomic history. For Jyoti, the color signifies the struggles of Indian indigo farmers oppressed by British rule back in the nineteenth century. Her “Indigo Narratives” series adapts ancient embroidery and printing techniques in wall textiles and one giant, cascading mobile to contemporary images that symbolize India’s struggle under colonialism and subsequent non-violent rebellion. Kina’s “Devon Avenue Sampler Series” a “sampler” of both needlework and appropriation, combines textiles from Indian and Jewish traditions with text and commercial iconography native to Devon Avenue, a street that Chicago magazine once called “the most beguiling commercial strip in the city” due to its dizzying array of ethnically diverse restaurants and shops. While “Indigo” is billed as a collaboration between two professional artists, the gallery didactics acknowledge other hands at work—much of the material labor that went into the art on display was performed by Indian artisans belonging to a fair-trade women’s collective. 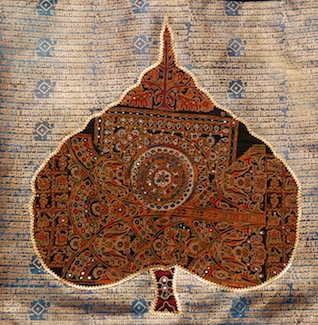 Knowing the artists’ backgrounds, interests and insistence on fair labor practices is crucial, since the work itself immediately reads as decorative. But the exhibition doesn’t let these details go amiss. A gratuitous number of educational props, including wall text, pamphlets and an informational video at the end of the show did what the artwork couldn’t—it connected the objects with the artists’ practice and intent. Overall, the exhibition feels sedate, tepid. The artworks are affable, well-crafted and easy on the eyes, but they don’t echo the delightful cultural cacophonies of the Chicago streets or bring to bear the urgency of post-colonial politics, which are as salient now as ever. And while art needn’t replicate the trauma of socio-political violence to get the point across, it also shouldn’t be so easy to dismiss.

In one sense, the most engaging aspect of “Indigo” isn’t the work on view but the subversion of the colonial labor system via cottage industry. Engaging artisans is laudable. Destabilizing the fixed categories of art and craft is still important work. But, here’s the rub: The artwork in “Indigo” is a bit like PBS. In principle, I really support it. I love that public television is a thing and I want it to continue. I would even paint a slogan on a cardboard sign and march in a rally to defend it. But “Downton Abbey” and “Art:21” aside, I can’t remember the last time I actually wanted to watch it. (Katie Waddell)

Through April 27 at the Chicago Cultural Center, 78 East Washington.