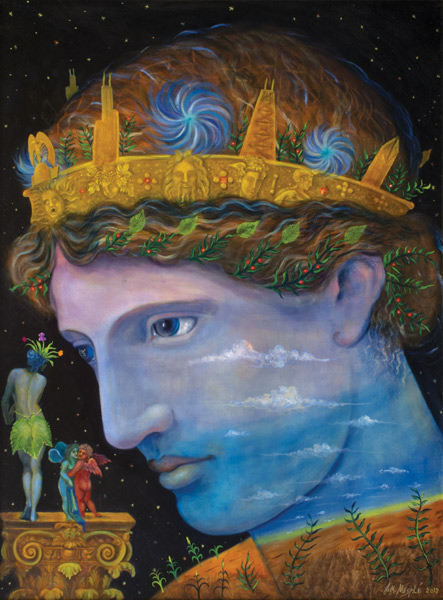 No one has sacrificed a bull to a Greek god in a very long time. Although priests and devotees have taken their worship elsewhere, artists have been depicting the Olympic pantheon for collectors ever since the Renaissance. Why have these de-sanctified deities remained so appealing? Possibly because they’ve allowed us to think about ourselves without self pity, guilt, hypocrisy or despair. We can see ourselves as both terrible and beautiful through a figurative tradition that has cultivated both the real and the ideal.

James Mesple has cut and pasted some ideas and images from that tradition to create a visual mythology and a world of fantasy that feels more like wishful thinking than divine revelation or confrontation with reality. His paintings feel pre-Renaissance but also post-Hellenic, most closely resembling the decorative arts of the late Roman Empire, which, coincidentally, are now on special exhibit at the Art Institute.

Visually, Mesple’s strength leans on intense colors, sharp contrasts and minutely fashioned details, just like the work done by many outsider or self-taught artists. He has bought into the world of classical mythology, but not the visual tensions that depicted it so powerfully from Botticelli to Picasso. His sense of form and space is better suited for the colored thread of tapestries than for paint on a flat surface.

But still, some of his images almost brought me to tears, beginning with the big blue spirit of Chicago cradling the still-born Calatrava spire in its capacious lap. Yes, I also love our skyline and wish that spire had risen between Sears Tower and the Hancock Building. I’m also moved by Mesple’s monumental Adam and Eve. Perhaps it lacks the thrill of the version by Lucas Cranach from which it was derived, but I share its longing that somehow all of earth’s creatures, including us, have some purpose deeper than making it from one day to the next.

As a Classical mythopoet in an age of iconoclasm, Mesple is definitely marching to his own drummer. I just wish I could follow him more often. (Chris Miller)