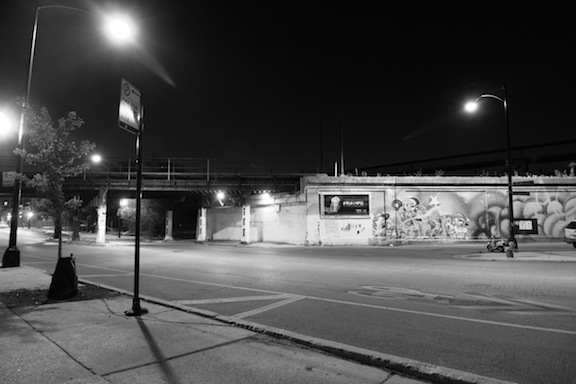 A versatile street photographer who stays on the quiet side, but with telling and intense effect, and shoots in black and white, Jonee Cocchia moves effortlessly from portraits, through signage, breathtaking architectural studies, and elegantly composed groups of objects like lines of news boxes, and finally to involved abstracted details. Composition is Cocchia’s high visual card, and he plays it through all his forays without overwhelming his subjects and their emotional evocations in feats of form. Cocchia’s most affecting images are shot at night on lonely Chicago thoroughfares bathed in the glare of streetlights. In “Night Blooms,” we look from the sidewalk across an empty street, cut by a viaduct, at a gleaming white wall festooned with aerosol art and an ad for McDonald’s line of coffee-shop-style drinks. We are drawn into the scene as though we had been making solitary night moves and had been suddenly transported into a postmodern installation. 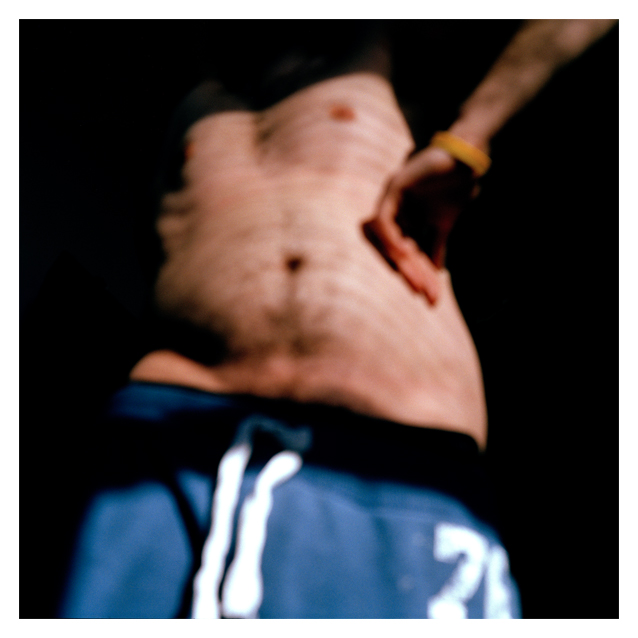 Nothing is clear or complete for Amanda Aton, who creates color photographic assemblages that are dominated by a large image flanked by three smaller ones. Employing unrelenting soft focus, showing only fragments of her subjects, composing with unfamiliar angles, and shooting at night, Aton makes sure that we are not certain of exactly what we are seeing, though we know in general, and, more importantly, why she is presenting it to us. The lead image in one assemblage (the works are untitled) depicts a cupped hand touching the side of someone’s stomach with her knuckles, leaving us in doubt about whether we are witnesses to an act of affection, aggression, or something else, of which we can only guess. The three accompanying small images of the side of a building, tree limbs and a tilted darkly patched face only add to our bafflement. Aton explains that she is revealing “the cracks between the excitement,” which are “not just glue.” Enigmatic as that might sound, it lets us understand that Aton has learned that life is dominated by mildly oppressive triviality, in which she is determined to rub our eyes. If the heads that she displays could only talk, they might tell us to stop making sense and accept, if not affirm, that we are askew in a haze. (Michael Weinstein)