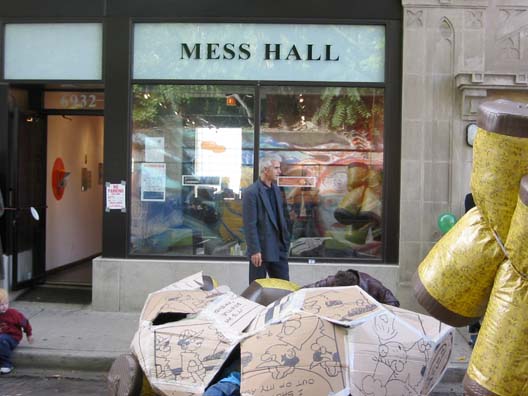 Lauren Weinberg did a fine job in Time Out documenting the basic facts around the shuttering this month of storefront community arts center Mess Hall’s decade of free offerings to the Rogers Park neighborhood and innumerable points beyond. Dan S. Wang gave a philosophical insider’s perspective on his Propositions Press blog. But, for someone who dragged my sorry carcass up north a paltry few times a year to a space that offered multiple unique events on most weekends, there are just so many memories that I associate with that tiny distant nook, that I am compelled, by way of elegy, to just indulge in something of a freeform brain-dump.

The first time I visited Mess Hall may have been for Thai activist-artist Vasan Sitthiket’s display of T-shirts; there were a series of presenters who talked about his work, which I witnessed mostly via audio while sitting on the floor within the clothesline-suspended forest of shirts. Alternately, it may have been when Temporary Services member Marc Fischer invited me to come and do a presentation about the hostile yet visionary 1980s Michigan hardcore band The Crucifucks, which accompanied Marc’s sermon on French punks Les Thugs. And there was Mike Wolf doing a slide show for perhaps over two hours on his experiences on foot wandering the Midwest during the summertime. I really regret missing Seattle artist and urban planner Sarah Kavage’s presentations on her “Industrial Harvest” project, where she bought and gave away one-thousand bushels of wheat. 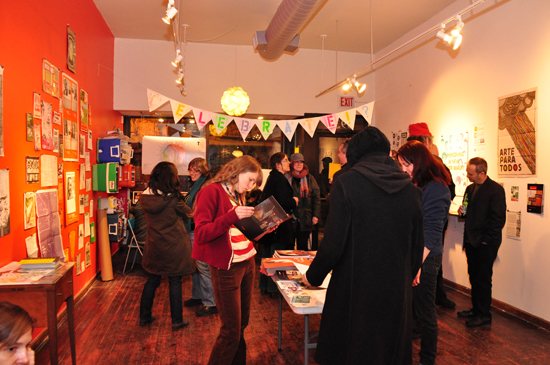 I also remember Soren Renner, the pro-fascist intellectual local dude who used to hang around with his braided beard and argue with leftists. He and I had a long, awkward interaction one day when I was gallery-sitting for my high-school students’ art show about the past and future of the CHA. I remember the big multi-day conference of individuals, groups and projects from and beyond Chicago, when Temporary Services member Salem Collo-Julin spoke about Britney Spears with touching empathy. I remember the AREA Chicago reading I participated in, with the boring Platypus Marxists. Also, the amazing presentation on police torture and atrocity memorials organized by the Chicago Torture Justice Memorials project, which included decorated prison jumpsuits for Jon Burge that my students created, inspired by Laurie Jo Reynolds’ work with Tamms Year Ten. And there was the presentation on archiving local forms of knowledge by the Spanish group Transductores.

There were “free store” giveaways, felting tutorials, foraging workshops, drop-in video-game access for local youth, visiting artists from all over, screenings and meals and planning plenaries. It’s totally fine that its run has ended, but whatever replacement initiatives there may be have yet to make themselves known to me. Until another such place exists, in the tradition of all places that have served so many functions with such limited resources, Mess Hall’s demise will leave a small, sad hole on the Glenwood strip. (Bert Stabler)