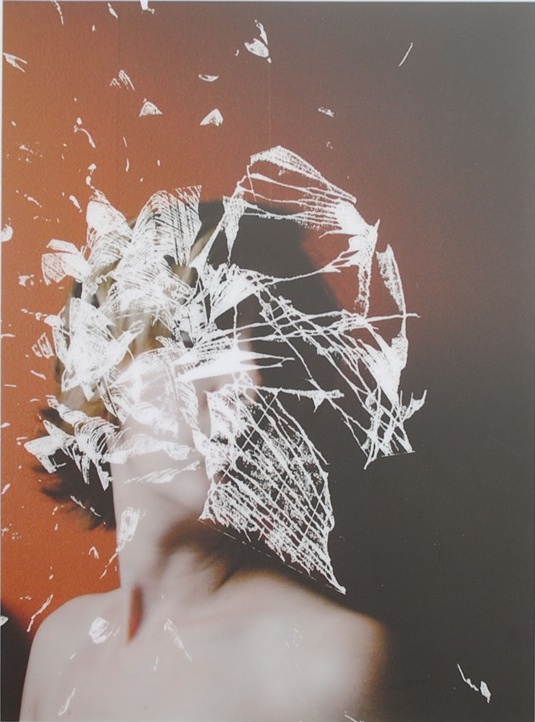 Back in the heyday of feminist photography, a quarter century ago, its practitioners often effaced, blurred, cut or otherwise mangled their ubiquitous self-portraits in an orgy of agonized self-rebirth and transformation, and then it stopped. Now Mel Keiser has picked up the neglected practices, taking color images of herself and hacking out substantial parts of them producing swirls, tangles and shards that cover her body and its surroundings in an expressionistic storm. Keiser’s intent is revealed in the title of her series, “ecorches”—flaying the flesh for the purposes of torture, science or both. Yet although the agony is unmistakable in the photo-works, they are too vibrant, dynamic and densely lush to suppress an ecstatic participation in them, whatever the psychic consequences might be. Covered in sharp-edged shards of glass, her face and torso horrifically scarred and pocked, in the colors of dried blood, it still seems as though Keiser is breaking out of a prison and preparing to rule the world. 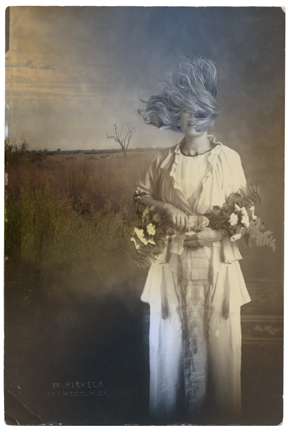 Veteran photo-artist Martina Lopez continues her explorations of the liminal zone between imagination and perception in her latest series of photographic works, which result from scanning old appropriated portraits into the computer and then using digital maneuvers and surface applications to alter their subjects’ features, add backgrounds and color the scenes in muted, yet rich tones that are given seductive texture by being printed on rice paper. Often interpreted as reflections on memory and its failings and gaps, Lopez’s images are much more accessible when seen as surreal and expressionist studies, in which her subjects are frequently partially effaced or, in a trope throughout the series, blessed or cursed with flyaway hair. If there are two subjects, one of them might be faded and the other intense, as though the latter was being haunted by the former. The danger of Lopez’s approach is that she will succumb to nostalgia for, of all things, a fabricated dream of a past that could never have been; yet the surrealist strategy of defamiliarization that she employs allows us to bypass all of that by letting us drink the images in as straight shots of a gothic brew that transport us into the worlds that burgeon within the psyche. (Michael Weinstein)