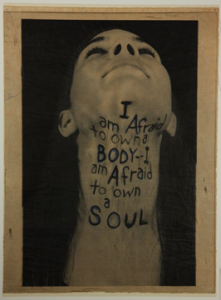 Lesley Dill. “A Word Made Flesh…Throat,” 1994. Gift of Stanley Freehling.

In conjunction with the newly opened “Picasso and Chicago” exhibit, the Art Institute’s Prints and Drawings department assembled “The Artist and the Poet”—a survey of twentieth-century collaborations and influences, though the connection is rather tenuous, as none of Picasso’s work is included within.

A poet, art critic and curator, Frank O’Hara is the most famous “poet among painters.” The curators devote ample space to his spirited collaborations, including over a half-dozen lithographs with Larry Rivers and an extraordinary print with Jasper Johns. From this last lithograph, titled “Skin with O’Hara Poem,” emerges the smeared image of a man’s face and hands pressed against glass. O’Hara’s poem, unusually gloomy, appears in faded typewriter text in the upper right corner. The ghost-like quality of the print is intensified by the fact that, of six planned prints, this was the only one realized before O’Hara’s early death in 1966.

The O’Hara collaborations are among the most rewarding in the exhibit thanks to the synergy of text and image. (Robert Motherwell’s “Red” series, inspired by Rafael Alberti’s “A la Pintura,” is striking for the same reason.) The exhibit falls short when the poetry half of the equation is missing. The lush and visually arresting prints by Ken Price and Tony Fitzpatrick were specifically created to illustrate book-length poems, but no text is available. David Hockney’s etchings and aquatints are entrancing, whimsical interpretations of Wallace Stevens’ poem “The Man with the Blue Guitar” but the wall text doesn’t offer any of the poem for comparison. Similarly, several Robert Rauschenberg collages with poet Andrei Voznesensky share a room with six Russian Futurist books that would all be more fascinating with a few translations.

The range of the exhibit is impressive considering that it is drawn entirely from the Art Institute’s permanent collection. Much of the work is rarely shown and the quality matches that of the artists’ more famous works in the Modern Wing. Yet the scope is narrow: the artists are geographically limited to the US and Europe, and only five women—Lee Bontecou, Lesley Dill, Nathal’ia Goncharova, Olga Rozanova and Ann Lauterbach—are represented. The work is well worth a visit, but it feels like the beginning of a more comprehensive exhibit. Let’s hope there’s one in the works—this installation proves it’s certainly fertile territory. (Lindsay Garbutt)

Through June 2 at the Art Institute of Chicago, 111 South Michigan.