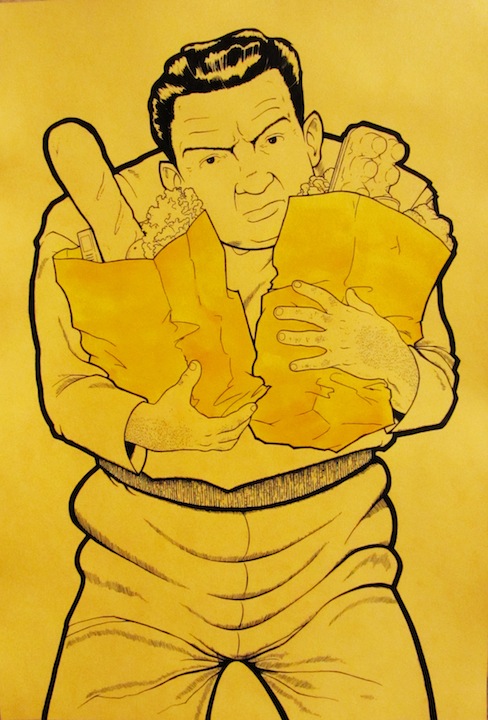 Gun violence in America, as interwoven with life as race, religion, politics and economics, can easily function as a through-line between each, predicated by crashes, elections, divisive beliefs and social dissonance. Whether gun violence itself is increasing or our awareness of it simply expanding, it’s an issue impossible to wrap one’s arms around and equally impossible to ignore. Mississippi native Russ White—no stranger to firearms—has exhibited primarily sculpture since 2004, and confronts violence and fear with three distinct bodies of new drawings and paintings, each using a delicacy and precision that parallels the quality of his previous work.

“Thug Life” presents White’s alternate take on the Advanced Silhouette SP 83-A shooting-range target, aka “the Thug,” drawn originally by two NY police lieutenants in the mid-1960s and still widely used. This barrel-chested tough is remade, by White, in various daily tasks, from carrying groceries and shaving to holding a baby, his expression always menacing. Humanized by these brief comedic glimpses into his world, however, the villain suddenly commands sympathy and appears as less of a “bad guy” than an everyman, calling into question how little might separate us from the criminal. 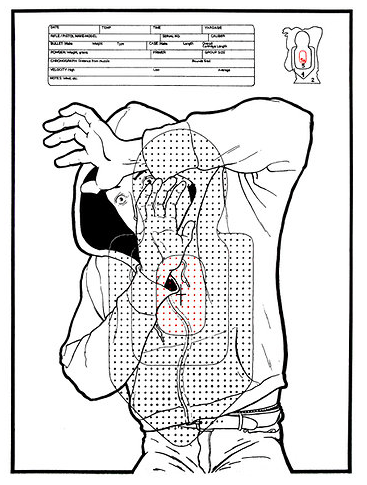 Across from the Thug is another series of more solemn targets directly inspired by Trayvon Martin’s death and featuring terrified victims in recoil who speak to the continuous urban violence that is considerably less a part of public discourse than the mass shootings that saturate the media. White’s victim/targets wear a contorting fear that read almost as a response to the Thug opposite them, though this fear carries incredible weight compared to the humor that the Thug ultimately brandishes. Some of the victims have hands raised in self-preservation, their mouths wide and eyes stricken, and that White is able to convey so much with ultimately minimal line work is a measure of his talent. 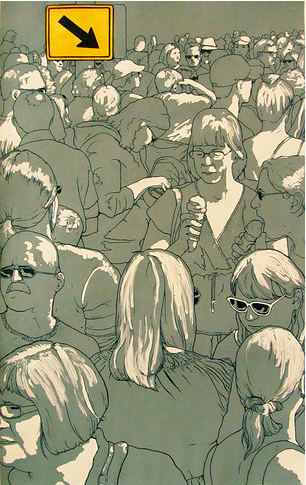 At a greater pitch of discomfort, White mingles paranoia, anxiety and anonymity in two crowd scenes. “The odds are good” is a densely peopled watercolor drawing behind which is mounted a red laser that glows through the paper, replicating a laser sight focused on a man’s forehead. The crowd is oblivious to the fact that they surround someone about to be shot. One crowd member looks out at us and we can’t help but wonder if he’s a witness, if we hold the gun that will stifle life. Why would we, would anyone, consider such action? Narratives cycle through my thoughts, but ultimately what I’m most aware of is how extreme and few the situations are in which I might actually be able to kill. “Warning Sign” is emblazoned with a yellow traffic arrow pointing out a man in another crowd, though whether or not this is the victim or the threat, we are uncertain. Just as we’re uncertain that, in any crowd, on any street, we may also stand in someone’s sight, whose motivation for pulling a trigger can be entirely unknown to us, but still change the course of our lives. White’s art deserves a wider audience than it’s likely to receive in this small gallery, but I’m left hoping that it will proliferate like the small arms whose impact he opens a dialog about. (Damien James)

Through April 6 at Werkspace, 2556 West Chicago.