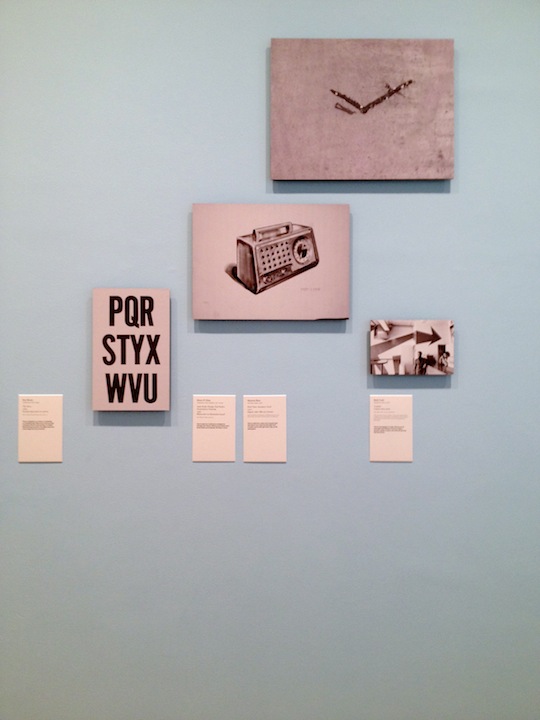 A new method of curating diverges from the standard model of curator-as-expert, but instead of watering down the practice by crowd-sourcing, this new train-of-thought curating culls from the seemingly endless stream of digital images in order to casually organize them. The exhibition is infinite. Image-sourced exhibitions, whether in real gallery spaces or online, tend to flatten the collected images and emphasize their logic of connections. It’s a loose logic. The organizational flow emphasizes the personality of the organizer, as well as the conditions of browsing and receiving images in a fast-paced viewing environment, rather than the slow contemplation of single images or masterpieces.

This is the case in “Test Fit,” an experimental exhibition at the Art Institute of Chicago, facilitated by the museum’s curatorial department of design in which the NYC-based graphic design team Project Projects (composed of Rob Giampietro, Prem Krishnamurthy and Adam Michaels) plucked images from the museum’s permanent collection database and arranged reproductions of art objects—paintings, drawings, decorative objects and more—into an idiosyncratic display in the Modern Wing. No original art objects are included, the walls are painted mental-institution blue, and the reproduced images are all printed in black-and-white, at their original sizes. The effect of the associative image collection is almost convincing as a romp through Project Projects’ brain, but it’s their object labels that are most original. Accompanying Laszlo Moholy-Nagy’s “Nuclear 1, CH,” the label reads: “This is a painting of the end of the world. What is your strongest memory of the sky? In the city, it always looks like an illusion.” Each image is appended with these daydream narratives. The real Moholy-Nagy painting can be viewed downstairs, in another exhibition.

Project Projects’ temporary remix exhibition recalls the great documentary photograph of French writer Andre Malraux in 1950 in his office. He stands before a field of reproduced images from art history spread across his floor. This was part of Malraux’s “museum without walls.” As a creative, artistic form of curating, it is well-adapted to artists’ practices. For instance, William E. Jones’ 2009 “Killed” is a video flipbook of canceled images from the Farm Security Administration archives. Each image is punctured by a black hole in its center, like a wormhole through Jones’ quick shuffling of the black-and-white images, which, in succession, effortlessly swallows a viewer’s attention.

What if train-of-thought curating were performed by professional curators within their institutions? The experiment does not always have a pleasant outcome. When the Tate Modern in London first opened several years ago, the curators displayed the collection thematically. I experienced a Jackson Pollock painting while hearing a nearby Maurizio Cattelan fart machine.

Train-of-thought image curating works well online, and for professional curators it’s a safer space to play. Karsten Lund, curatorial assistant at the Museum of Contemporary Art, has maintained an image blog for several years, titled Blind Handoffs. All of the images are of art objects, with new ones added often. The images are arranged with rhythm so that one image suggests the next, like an intuitive unfolding of a contemporary art archive. There’s a string that connects the whole stream of images, but the longer you look at the stream and try to pin down the resonances, you lose track of the thread; it dissolves into something meandering and intangible: a thought.

Train-of-thought curating seems to be less about curating and more about editing. Traditionally, curating is not purely motivated by the creative aspirations of a person who simply loves images; rather, curating is a negotiation of a creative idea through institutional, educational and financial mandates. On the other hand, image editing is purely about shaping and revising a stack of images into a style, a behavior, a pattern.

The best application of train-of-thought curating I’ve seen is on a tumblr-based blog called I’m Google. Organized in a grid, like Google’s image-search function, artist Dina Kelberman is building a chain-reaction collection of associative images that’s full of wit and viewing delight. Here, images beget images. Although the collection is digital, it has a sensual quality of being handmade, as if Kelberman were feeling her way through the internet.

The entire train-of-thought curating project, across platforms and media, echoes Goethe’s ideas on morphology from 1817. His book “On Morphology” is concerned with the formal and structural similarities of organisms, especially botanical forms. One of his ideas is that things grow and manifest as representations or essences of some master form. Although it is difficult to experience successive growth firsthand, Goethe says we can understand them best upon reflection, as memories, and through intuition.

Project Projects shows at the Art Institute of Chicago, 111 South Michigan, through April 28.