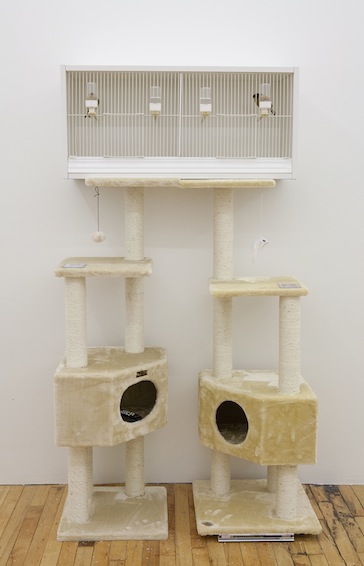 The center of Andrew Norman Wilson’s newest exhibition—or “town,” as he calls it—is its press release, a masterful cultural critique that is a “play” placing the artist at the center of the narrative of the exhibition’s conception to completion. Visitors to the town are faced with a collection of seemingly incongruous elements (including live Gloster canaries, a cat tree, orchids, FedEx boxes, hot dogs, baseball cards, bottled water, televisions, and two hired interns hawking bootlegged Ashton Kutcher movies in North Face) that parody the chaotic randomness of corporate branding and PR language.

By calling attention to these various branded objects (Walmart, Vizio, Xfinity, Nestle, Poland Spring, North Face and others) in the play, Wilson neither presents them as art objects—they are not readymades—nor symbols; rather, they are simply products we interact with every day, that can be bought at Home Depot and returned like the wrong kind of lightbulb. In doing so, they call attention to, and critique, the blatant product placement in Walead Beshty’s empty FedEx boxes and Wade Guyton’s Epson printers. 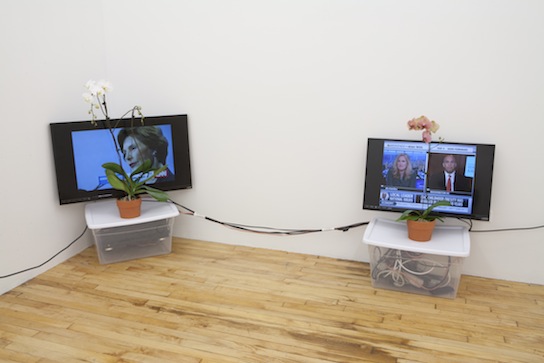 However, twists in Wilson’s plot fall flat in the context of his larger presentation of ironic commodity fetishism. Rather than creating a reciprocal exchange in an otherwise hierarchical relationship, Wilson’s onsite interns function merely to advance the punchline of the play. Potentially charged exchanges—the FedEx box is shipped empty to Rashid Al Maktoum, the prime minister of Dubai—are presented alongside frustratingly meaningless, novel props (the canaries). Unlike Wilson’s previous work, which often used technologies to call attention to problematic global labor practices, the politically middling atmosphere of “The Refrain: Medfield/Walpole” mimics the contemporary leftist neoliberal mindset of the distracted-attention economy. Like his audience, Wilson refuses to take an ideological stance, serving up only a couple of half-cooked hot dogs. (Sofia Leiby)

Through April 20 at Threewalls, 119 North Peoria.