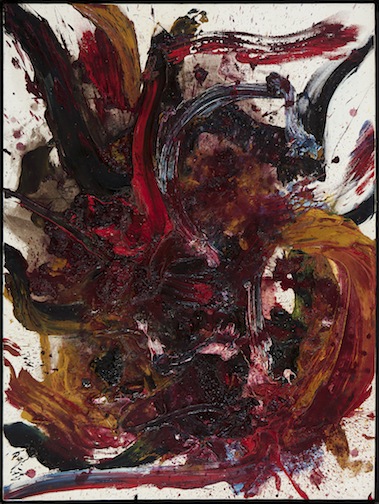 “Destroy the Picture: Painting the Void, 1949–1962” is an exhibition forged in the fires of the Second World War. Assembled by former Los Angeles Museum of Contemporary Art chief curator Paul Schimmel, this globe-spanning assortment of works establishes the mutually defined conditions of creation and destruction as a novel, cohesive and, until now, underappreciated approach to postwar art-making.

There’s tremendous depth of feeling present in this show’s stunningly diverse offerings. Whether in the slashed and scarified surfaces of Italian artist Lucio Fontana’s monochromatic “Spatial Concepts” or in the blood-red entrails of Kazuo Shiraga’s “Wild Boar Hunting,” the physical and psychic devastation wrought by the war’s inhuman ravages are writ large upon the gallery walls. But beneath palpable anguish and desperation there lays a considerable amount of hope. 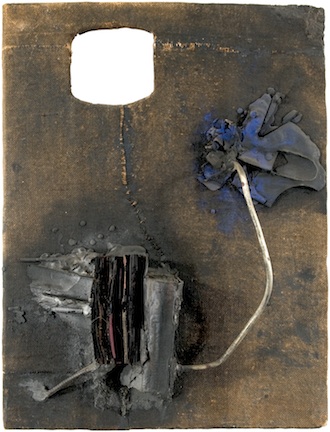 By confronting and embodying the tragedies of World War II and its aftermath, these works are affirmations of creativity’s transcendent powers. Typically destructive practices—cutting, burning and shooting—are employed in a positive sense; while restorative acts, such as the stitched and sewn brown sackcloth of former P.O.W. Alberto Burri’s  “Sacco e verde” find solace even in moments of intense pain. These broad-ranging new techniques, innovative at the time, have, in the decades since, become canonical.

Oddly, a sizeable portion of the paintings in “Destroy the Picture” are really paintings in name only. The discourse that conceptualizes them as such makes for provocative PR, but collapses under the weight of serious scrutiny. Works like John Latham’s book-laden masterpiece “Great Uncle Estate” or Niki de Saint Phalle’s brusque “Shooting Painting American Embassy” may seem like radical breaks with the past when called paintings, but as sculptural descendants in the tradition of synthetic cubism, not so much. The distinction doesn’t adversely affect the enjoyment of this excellent show, but demands consideration. (Alan Pocaro)

Through June 2 at the Museum of Contemporary Art, 220 East Chicago.