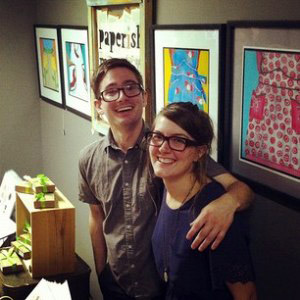 Harvard economist Richard Freeman has called this generation of twenty-somethings “lost,” which is a nice way to say screwed. Underemployed and underpaid, floundering in an anemic economy, it’s a terrifying time to start a business. Lisa Muscato and Sean Murty, the owners of the fledgling combination shop and art gallery Paperish Mess, don’t seem too worried.

Their project of opening a shop has a reckless bravery to it. The couple staked their own money in Paperish Mess, which features a lovingly curated collection of objects from more than seventy-five independent artists and a rotating art installation. Lisa and Sean have yet to draw paychecks from the store, but then again, “a paycheck was never something we wanted to base our lives around,” they say. Instead, they see themselves, and their shop, as serving a “greater good.”

“We’re building up a community of artists that will appeal to people… we want people to come in and be inspired… empowered to do whatever they want,” says Lisa. “Local businesses are better for vendors, for artists, for owners, for the community. We saw a lot of vacant spaces, not a lot of local businesses, and we want to invest in the neighborhood… Better a space like ours in a storefront than a corporation.”

Owning and operating a shop also affords Lisa and Sean, both artists, creative opportunities they might not have otherwise had.

“It gives us a chance to experiment. Sean had never done woodworking before he built the furniture in the shop, and now it’s something he’s passionate about. Jewelry making used to be just a hobby, but now I have people depending on me to get orders out,” says Lisa. “It doesn’t feel like work. When I come here [the shop] from work, it’s relaxing, it’s where I want to be,” adds Sean.

Living out a dream isn’t without sacrifices, though. Both have second jobs. Sean works full time doing design work for a window manufacturer. Lisa is a shopkeeper at Martyn George. They often stay up late and wake up early, and rarely go out and see their friends. Long hours and little money is a familiar situation for the members of the “lost generation,” but Sean and Lisa seem to have embraced the other side of being lost—the side that can turn a road trip into an adventure, the side that gives you the freedom to find your own way and the courage to take risks.

“One of my roommates in Buffalo had this quirky dad who used to say, ‘You’re never going to get a hit if you don’t swing.’ It’s goofy, but that became a thing I started saying when we were setting up the shop.” (Meredith Wilson)