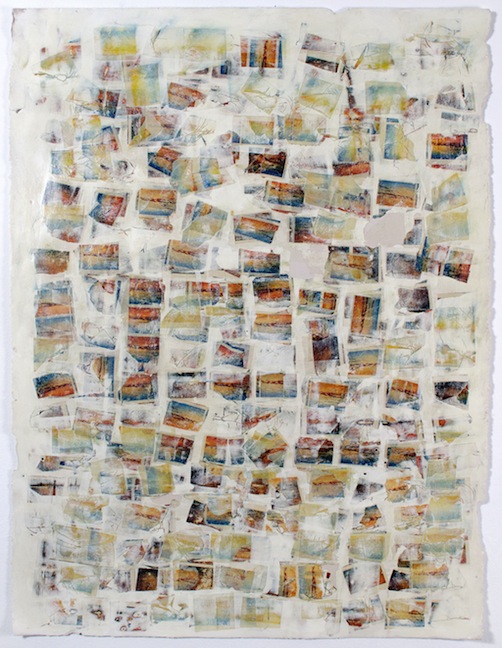 The term photo-work is stretched to its limits and perhaps beyond in Daniel Hojnacki’s images in which base photographic prints are subsumed in a process in which spackled and taped paper is run through an inkjet printer and the artist performs surface alterations, producing dense, scratched and sinuous designs punctuated by shard-like shapes, in which the photographic element is sometimes discernible and often obliterated into abstraction. In his most striking, original, complex, and effective works, Hojnacki sets up grids in which small prints of the same photograph are varied in their legibility and ranged against each other so that they are frequently askew and sometimes pocked with gaping white holes. The grids are power-packed and arresting because they compress into a single frame a dizzying rendition of the multifarious ways in which we might sense a single scene, depending upon our inner and outer atmospheres. The great American philosopher William James famously called experience a “blooming and buzzing confusion”; Hojnacki has the visual intelligence to capture that insight in an image. (Michael Weinstein)

Through May 31 at The Coat Check Gallery, David Weinberg Photography, 300 West Superior.