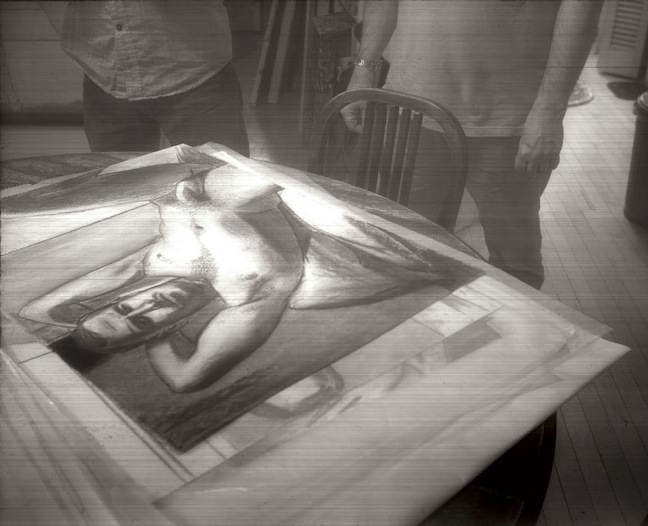 On July 4, 1971, Michael Hart uploaded a text version of the United States Declaration of Independence onto the Xerox Sigma V mainframe computer at the University of Illinois Materials Research Lab. By allowing the shared file to be freely downloaded by any user that logged onto that particular Sigma V—one of fifteen node computers that made up ARPANET, later to become the Internet—Hart unknowingly introduced the first electronic book and heralded its immeasurable effect on how media is read. This effect was truly realized two decades later as affordable image scanners catalyzed the digitization of both text and image. A common flatbed scanner—modified by hand and outfitted to resemble a conventional photographic apparatus—allowed artist John Neff to produce a series of unassuming black-and-white images that make up his solo exhibition at the Renaissance Society. The long exposures travel conduits between a do-it-yourself photographic contraption and a personal computer running consumer-grade software before revealing themselves line-by-line with lateral distortion from glitched data and mechanical idiosyncrasies. As photographic prints the images are minute in scale, tucked beneath black Nielsen frames against a dimly lit gallery dressed in medium grey. The exhibition announces tropes of modernist display to stage the covert contemporaneity of Neff’s processes. The images’ line-by-line production encourages a line-by-line reading, loosely simulating a common sensation: the anticipation of waiting for a digital image to present itself on screen. It is not irrelevant that the duration of time commonly allowed for an image to render—whether on screen or on the wall—shrinks exponentially as the tempo of digital media increases. To place stock in the durational processes of capturing an image (exposure) and producing an image (development) is a truly photographic maneuver. This is a peculiar fixation for an artist that has shown no prior enthusiasm toward engaging in any medium-specific dialogue, let alone one as tired as that surrounding conventional photographic processes, the ontological ramifications of their rapid digitalization, and the indomitable circulatability of an image. At its best, Neff’s exhibition is less a dialogue than an open book. Acknowledge that all fifty-eight photographic prints are displayed chronologically, time-stamped within their mechanical titling conventions, and organized linearly left-to-right, and a “reading” of the exhibition appears appropriate. The unabashed diaristic organization of the installation allows fractured subjectivity to develop against the linearity of time. Necessarily uncontextualized, the subjects of Neff’s photographs fall between suspiciously quotidian and anxiously intimate. They are individual nodes within an expanding network, murmuring beneath the din of media’s transubstantiation. (Pat Elifritz)

Through April 14 at The Renaissance Society, University of Chicago, 5811 South Ellis.