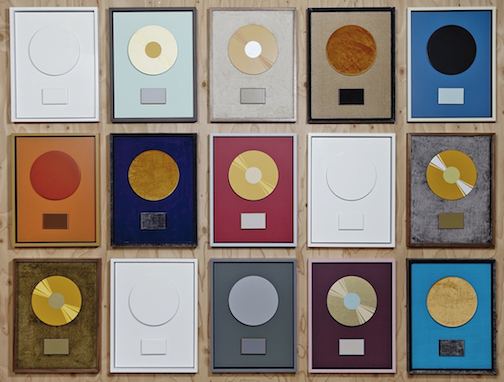 In what was almost certainly a serendipitous moment of municipal planning, Jeffrey Forsythe’s solo show, titled “Social Studies,” found itself enhanced by the precariousness of the path one must take, at the time of my viewing, to its entrance; a narrow wooden bridge, spanning the gaping expanse of what was Superior Street sidewalk, gave the entrance a ramshackle castle appeal, flimsy dressing over a deep wound, forcing one to step lightly amidst the bustle and gloss of River North.

Unlike the sidewalk, which will one day be filled again, the various icons of power Forsythe puts on display seem to be fatally wounded, swallowed by avarice or pride, drowned in biblical floods, trampled by the steady march of progress or, in one particularly depressing/amusing case, hopeless against the vast expanse of space itself. The show is dominated by “Trophy Case,” an enthralling gunmetal-and-cream composite of oils, acrylics and cut paper. Residing below a banner proclaiming “American Superiority in the Twenty First Century,” the titular case is, as Russ White points out in “On Social Studies,” empty, its ornate cavities left barren under the watchful gaze of a buzzard, while the 20th Century Fox logo—matte, unvarnished bronze—lists in turbulent seas reminiscent of Hokusai’s great waves (how pointed the image would have been at the height of the 1980s Nipponomics scare); the pallor, the scavenger, the scuttling and a garnish of flowers drapes American superiority in a funerary shroud.

It is to Forsythe’s great credit that imagery which could be seen as gauche—e.g., the faux stained glass of “Stakes are High” replacing Christ with a cup, and a silver one at that—does not come off as pontifical or sneering. Even at its most explicit, such as the banner topping “Trophy Case” or the harsh truth which gives “You’re Not So Terrific” its title, Forsythe’s message is counterbalanced by the beauty of its delivery. (B. David Zarley)