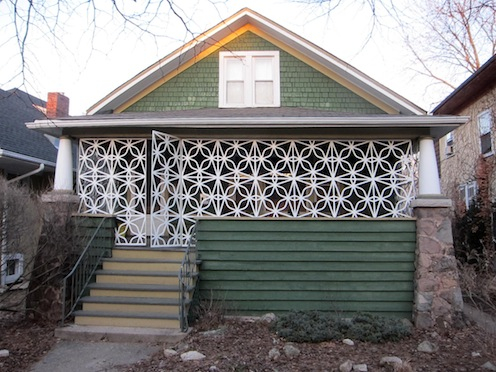 Quoting British artist Liam Gillick: “Art is a convenient term for a mid-space location where you don’t need cultural permission to carry out certain corrective tasks in relation to society in general.” As an artist known for his fences and screens, as well as public interventions, his work seems like a worthwhile point of departure for a high-art take on Edra Soto’s magnificent iron porch-screen, “Graft,” an outdoor re-creation at Oak Park’s Terrain space of similar decorative security fences on porches throughout Soto’s native Puerto Rico. The “corrective task” might be the integration of this semi-diverse neighborhood in a highly segregated region. And yet a fence, especially one that evokes a filigreed cage, clearly sends a message about boundaries. Thus the term “graft,” probably intended horticulturally, resonates nicely in a town where corruption perpetuates inequity.

And then, Gillick again: “What I like about the position of an artist is that you might start out intending to be a DJ but end up cleaning the floor with vodka and glitter instead”—a koan that at first seems like it might make sense, but not necessarily. You could read that as an assertion of artists’ unclear class status (Soto teaches high school art—talk about your nebulous class status), or as an expression of a quasi-Puritan distaste for showmanship (Soto has no such hang-up), or as an advocacy of art as service rather than product (although vodka and glitter may not be the best floor cleaner). What is clear is that, for better or worse, Gillick is an artist you are better off having read in order to begin to view; Soto requires no prerequisites.