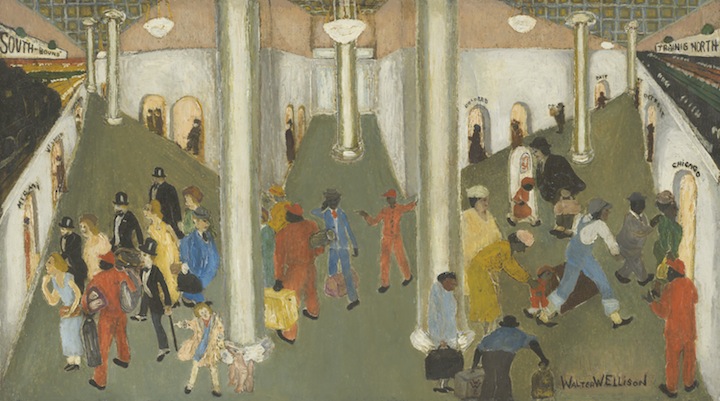 The flight from oppression makes such a compelling, if predictable, story; it has been made the primary theme of this exhibition about the art of Chicago’s immigrants in the first half of the twentieth century. Since Jews have been fleeing oppressors ever since the time of Pharaoh, Chicago Jewish artists dominate the exhibition. Thanks to loans by local collectors, especially Bernard Friedman, there are many fascinating works by Todros Geller, Morris Topchevsky, Misch Kohn, Max Kahn, Aaron Bohrod, David Bekker, Rifka Angel, Fritzi Brod, Emil Armin, Leon Garland and Moholy-Nagy.

The eye-opener for me was the prints and paintings of Bernice Berkman. Her career in art was brief, but she really had a fiery spirit and a remarkable empathy not only for her own people but for displaced African Americans as well. (She ended up marrying one and running a wallpaper company with him in NYC). 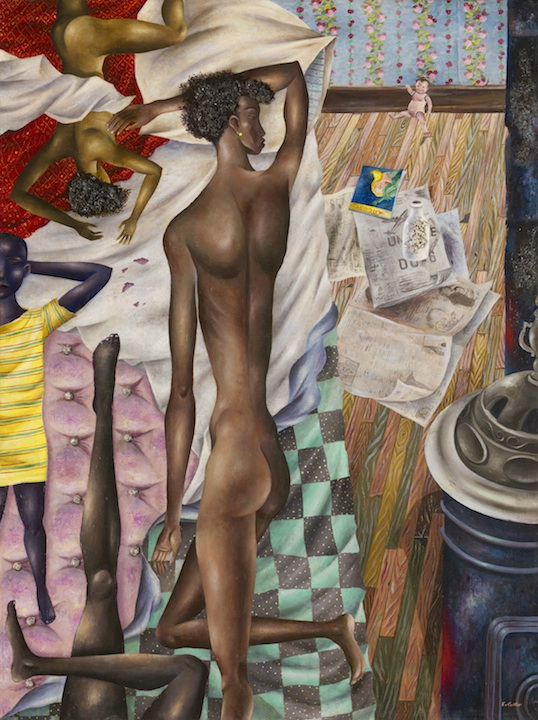 Thanks to the Art Institute’s own collection, the show also offers a fine survey of African-American artists of that period. In this context of displacement, Eldzier Cortor’s intensely jumbled “Room No. VI” has never looked more profound. When will this exceptional artist ever receive a retrospective in Chicago? Mexicans are the third immigrant population to receive special attention in the show. Unfortunately, local Mexican painting did not blossom until the Civil Rights era, so we are shown a few ceramic pots from Hull House, the art of non-immigrant Mexicans (Diego Rivera and Carlos Merida) and depictions of Mexicans by other Chicagoans. A German-American’s depiction of a Mexican pool hall is a highlight. Herman Menzel was a very sharp, though reclusive, painter who perfectly captured the ambience of some strong, self-contained Latinos in a new country. Another highlight were the in-your-face woodcuts of Elizabeth Catlett, an African-American woman who loved Mexican political art so much she eventually moved there.

There are many other brilliant pieces and good-though-unfamiliar Chicago artists in this show. But hopefully, future exhibitions about Chicago immigration will include a greater ethnic as well as cultural diversity. What about Chinese, Greeks, Irish and Scandinavians? And what about art forms that don’t fit into the canonical narrative of Modernism? The Armenian painter Hovsep Pushman and the Czech sculptor Albin Polasek were two of the great artists who came to Chicago in that era. Sometimes immigrants were not concerned with social or Modernist agendas, and I’d like to see that kind of work as well. (Chris Miller)

Through June 2 at the Art Institute of Chicago, 111 South Michigan.