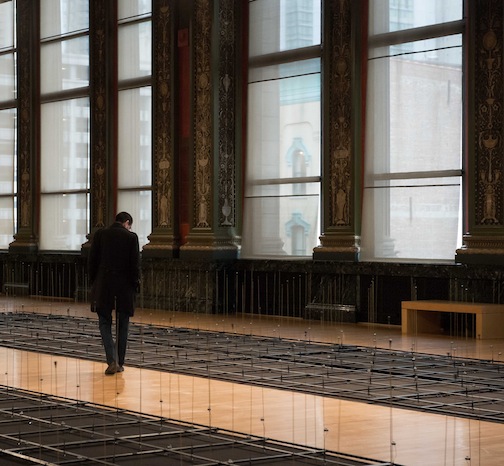 The brass rods shudder as the wind sweeps through the prairie. Steel grasshoppers click in the tall grass. A small mole cricket snaps its wings. And rain falls metallic on black soil.

In the sound installation “Prairie,” currently on exhibit in the Yates Gallery at the Chicago Cultural Center, artist Shawn Decker composes an abstract symphony of microcontrollers, computers, motors and recycled cellphone speakers. Subtle algorithms echo the dynamic movement and rhythm of the Illinois grasslands.

Decker grew up at the end of a dirt road in Western Pennsylvania. He remembers canoeing down the Susquehanna River, camping in the hills of the Allegheny Plateau, and watching the flutter of cardinals and blue jays in the trees outside his window. His artistic practice involves making meticulous tape and phonograph recordings in order to deconstruct rhythmic and spatial patterns of sound. He says, “The algorithms I compose are derived from natural processes. I often use configurations of Brownian motion of particles or fluctuations of 1/f noise to translate and reimagine the sound of leaves falling on the ground or raindrops hitting a blade of grass.”

Decker’s electro-kinetic soundscapes reveal an uncanny relationship between nature and the machine. Inspired by the dissonant and harsh sounds of avant-garde compositions of twentieth-century Futurism, the artist uses industrial materials to create music of the machine age.

“If you listen to the distinct sounds very closely, you will notice they are actually extremely artificial. All I’m doing is turning these small cellphone speakers on and off. When I send a 5-Volt pulse, and turn them on and off, I get a click. This is not unlike the syrinx in birds which vibrates to produce sound.”

A DIY geek, Decker loves to tinker around in his studio with computer programming, coding and sound synthesis. In a 1998 sound installation “Night Sounds,” he programmed an electronic score to be played by small motors striking piano wires and corrugated steel buckets suspended from the ceiling. The computer algorithms modeled after the song of cicadas captured the sounds of a hot summer night.

Subtleties of constant change imbue the artist’s soundscapes with the gradual ebb and flow of a natural environment. “It is much more fun as a creator to compose a piece that is continuously surprising you. I think ‘Prairie’ is really funny and I will often laugh out loud when it does something I don’t expect. The element of change and indeterminacy allows you to become a much more active listener.”

The sounds of the city never stop. The El sparks and creaks as it turns the steel bend. The monotonous drone of car engines rises above a blue cloud of exhaust smoke. Pigeons gather in swarms to coo in the burning heat of electric lights. But for a moment, in the dimly lit hall of the Yates Gallery, we can stand still in a sea of metal grass and do nothing but listen. (Annette Elliot)

Shawn Decker’s “Prairie” shows through May 5 at the Chicago Cultural Center, 77 East Randolph