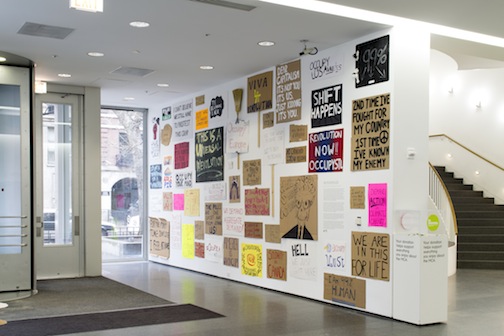 A flash of light. You close your eyes. The bright glow lingers for a moment, no longer there, but not yet vanished. The voices of the ninety-nine percent reverberate in the galleries of the Museum of Contemporary Art—an afterimage of the tumultuous demonstrations of 2011. “If you are not angry, you are not paying attention.” “You should be here #OccupytheHood.” “Class war ahead.” “This is a universal revolution.” “Wake up.” The cardboard protest signs hang silently on the wall. A museum plaque announces that, if interested, you may check out a sign for the duration of your visit. Please just notify an attendant.

But few people seem to do so.

The protest-sign archive, titled “Phase I/ Live Archive,” is one part of Jason Lazarus’ multimedia solo show at the MCA. Lazarus began “Phase I/ Live Archive” as an artist-in-residence at the University of South Florida in Tampa. Moved by the revolutionary zeal of Occupy Wall Street, the artist invited students to re-create the handmade protest signs. Collecting images from Facebook and Twitter, the participants traced the activist slogans with black marker and spray paint.

In a futile attempt to learn activism, students carefully copied the makeshift cardboard posters of Occupy Wall Street. It is difficult to see how the meticulous re-creation of posters of protest can overcome the distance between complacency and engagement. Nicholas Wylie, co-founder of the ACRE residency program, further critiques the deeply inherent complacency of contemporary culture in the exhibition’s brochure: “Most of us were not at the parks or in the streets; we looked on from afar and allowed ourselves to be mildly excited at the prospect of what might happen, but couldn’t be bothered to raise our voices in solidarity.”

Though “Phase I/ Live Archive” struggles to imagine an active relationship with a not-so-distant history, the makeshift posters remain as ghost images of a failed attempt to learn democracy. Instead, the cry for revolution is left to the artist alone, who marches to the beat of a drum muffled by the white walls of the art museum. (Annette Elliot)

Through  June 18 at the Museum of Contemporary Art, 220 East Chicago

why review just one third of an exhibition??? i don’t mind criticality…

Seriously, I’m sorry but this is ridiculous. You couldn’t ascend two floors to see and think about the rest of the show? This does not qualify as a “review.” Why bother?

Would you also tell a scientist not to use a microscope?
It is a legitimate method to review a single artwork in an exhibition, especially an artwork like this.

Sure there’s enough here to talk about. But ‘this art isn’t effective activism’ is hardly elucidating. It is absurd to expect this gesture to single-handedly tackle complacency. Also love it when I’m quoted out of context. Dunno, this kind of quick cynicism just bums me out not because it derides the piece but because it doesn’t leave many places to go, theoretically. Like the possibility of an engaged conversation here, but maybe one that acknowledges an art context in a maybe more nuanced way that doesn’t stop at ‘because its in art it doesn’t serve its original function (well)’. Why… Read more »

jason, i would argue, especially with a piece like Phase 1, that it be taken in context with the rest of the work.

Sure it may be a small cheap shot or drive-by criticism to focus in on one aspect of a show without considering a show’s overall operation, but I think it is perfectly fine to point out that having the public re-create protest posters for an artist’s major museum solo show is kind of strange and does very little in the way of elevating the discourse of art and protest culture. Even more strange that it’s a BMO Harris Bank sponsored show. It’s like commodifying your dissent and having the enemy sponsor it (which might be an intentional subversive tactic by… Read more »