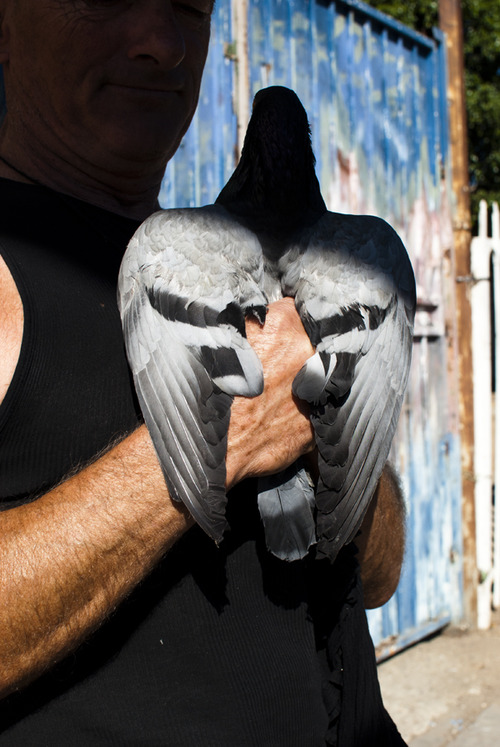 Todd Diederich works as a cultural documentarian, moving around Chicago as directed by the cosmos, finding sources of unusual effervescent energy and pointing his camera at them. His lush, immaculately composed and focused color photographs demonstrate an interest in somewhat marginalized but certainly not repressed cultures and their odd artifacts.

“Luminous Flux” at Johalla Projects is a fairly small collection of fairly large, unfussy photographs of the “real” Chicago. A giant neon cross adorns the front of a church, likely in Pilsen, the artist’s Mexi-Catholic stomping grounds. A mangy but cheerful plant grows out of a re-purposed PowerWheels convertible. A shadowed figure holds a pigeon in his hands, its wings regally spread to reveal in the sunlight a grandeur we normally don’t acknowledge. Wings are, after all, magnificent feats of natural engineering—even, and perhaps especially, when they’re on pigeons.

Diederich’s subjects inhabit a few special slices of Chicago—some of the deepest underground of our subcultures—populated by rainbow-haired sea punks and sequined drag queens. They don’t go to parties; they are parties. Popular culture tends to follow a path they’ve already created. Although the photos at Johalla Projects feature less straightforward portraits than Diederich is known for, the essence of these free-spirited people remains in their wake. A couple photographs of the endlessly fascinating voguing competitions that Diederich won a Propeller Fund grant to pursue hang on the walls, and their vibrancy is undeniable, but the quiet moments in the show hold just as much weight. A photo of the sky reflected in an oil slick and a pi-shaped blood stain demonstrate our minuscule human marks on our tiny earth which floats in endless space, which is what Diederich is really interested in these days. (Kelly Reaves)