It’s an exciting moment for sculpture in Chicago. I’ve tracked a few patterns in contemporary object-making through these nine current exhibitions. 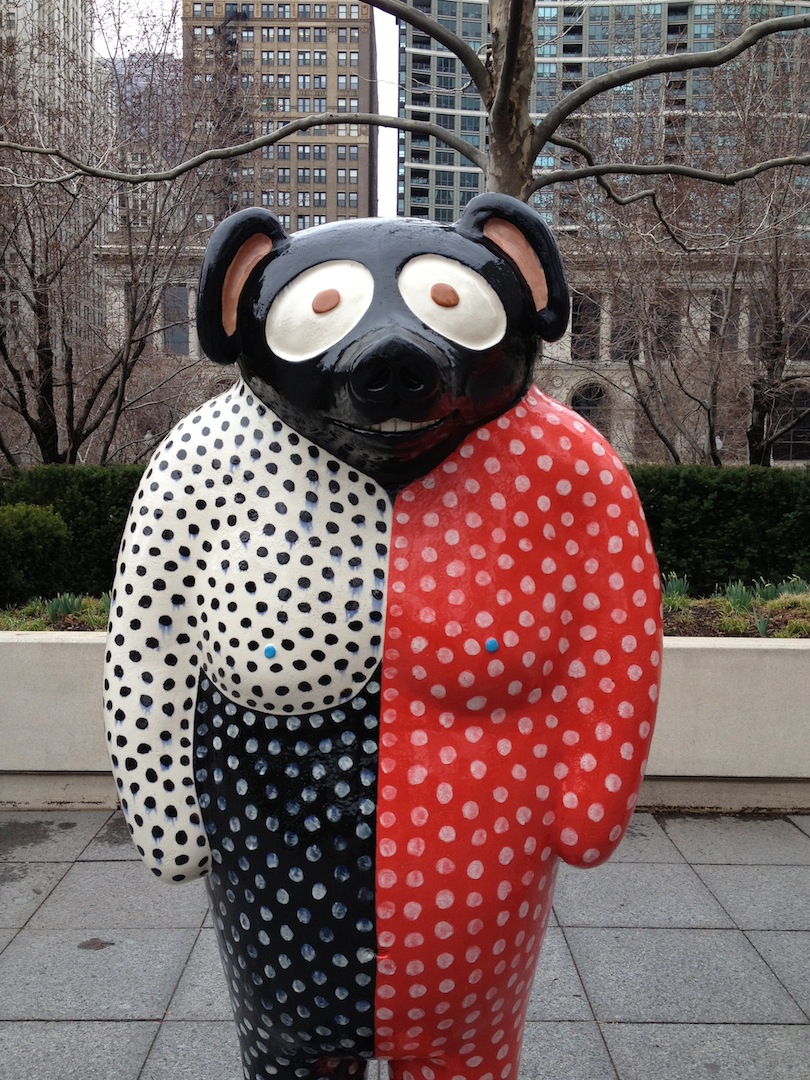 Jun Kaneko at Millennium Park
The newest addition of public art to Millennium Park (for seven months) are dozens of large glazed ceramic sculptures by Jun Kaneko, a Japanese-born, Omaha-based artist who should be familiar to Chicagoans (he’s shown here seventeen times in the past thirty years, but not since 2003.) All of the ceramic sculptures are graphically painted (polka dots, mummy tape) in bright colors. On the Randolph Street side are standing figures, tall and fat as taxidermied bears, but with pig faces and Looney Tunes eyes. There’s a hoard of them, and they’re a little freaky (one has blue nipples). On the Monroe Street side are tablet-shaped objects, the size of tombs, similarly painted. I almost scorned these sculptures—they verge on Cows on Parade kitsch—until I read the artist’s description. The figures are Tanuki, or mythical Japanese trickster characters with jazzy skin and desperate smiles. They’re pleasurably sinister, and a little more non-denominational than the Buddha heads spouting all over Chicago, by Indira Johnson.
Through November 3 at Millennium Park. 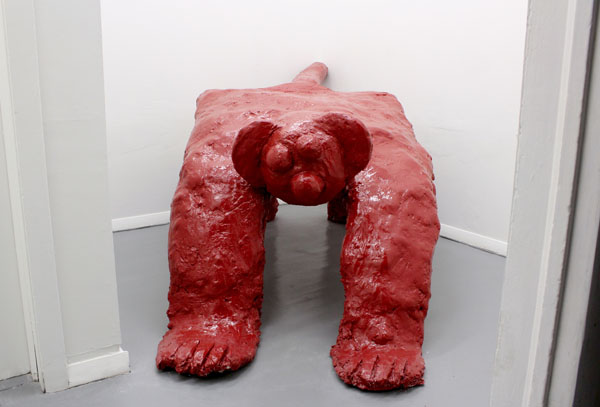 Chloe Seibert at Queer Thoughts
Chloe Seibert’s “Rafflesia” makes a great counterpoint to Jun Kaneko’s new sculptures in Millennium Park. It is a red beast, tucked into the closet of a third-story Pilsen apartment gallery. Is this the thing in the room we all know intimately, uncomfortably, but cannot discuss? The downward-facing dog sculpture, with eleven front claws, erect tail, and a dumb/happy face, begs for attention. Overheard are the screams of a woman in a video. It is the artist, filming and shrieking at Chicago architecture.
Through April 21 at Queer Thoughts, 1640 West 18th, #3. 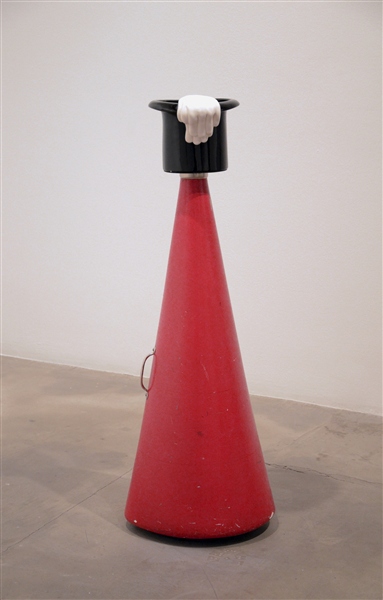 Karthik Pandian at Rhona Hoffman Gallery
The Los Angeles-native is the new visiting professor of art at the University of Chicago, and has his first solo Chicago show at Rhona Hoffman Gallery, which is filled with leftover objects from a performance held elsewhere. The performance is documented on video, and displayed upstairs, but it’s a montage with cheesy editing that does little to explain the gallery objects. In spite of that, many of the sculptures stand on their own, and seem dropped out of a film noir prop room: a black feather wig, a mop, a pair of black wax gloves. Several sculptures incorporate stainless-steel poles, to varying degrees of success. Most of the mock objects have a sense of humor, but you’ll be laughing on the inside.
Through April 20 at Rhona Hoffman Gallery, 118 North Peoria. 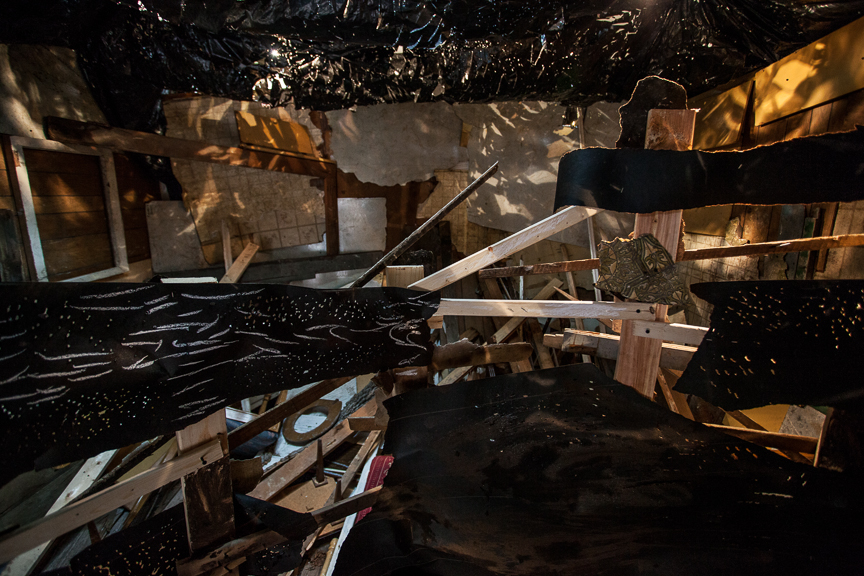 Abigail DeVille at Iceberg Projects
This is an enchanting exhibition of classic-style, immersive installation art. The backyard art gallery of Dr. Daniel Berger is transformed into a set for the viewer to explore. It’s a hovel of spiraling scrap, culled from neighborhood trash bins and demolition. It’s a squatter’s hut. It’s a magical den. It’s participatory and open-ended theater. This is the best exhibition I’ve seen yet at this venue—not to be missed, but by appointment only. There are secrets here. I don’t want to give them away. Watch your step.
Through June 1 at Iceberg Projects, 7714 North Sheridan. 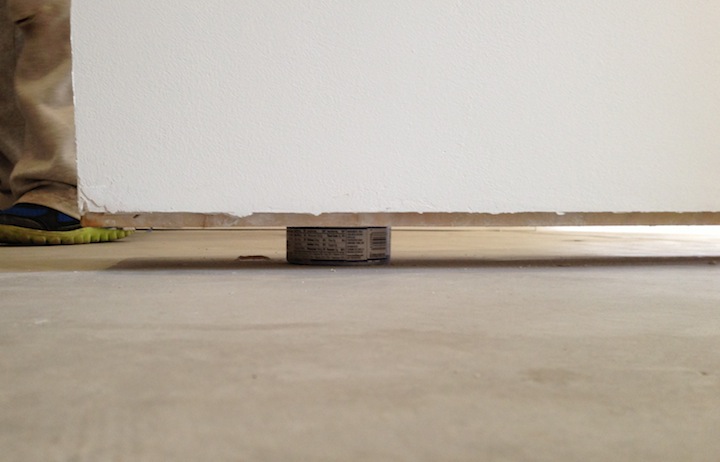 Troy Briggs and Brendan Fowler at Shane Campbell Gallery
A t-shaped display wall crammed into a small room. Essentially, it’s a white cube nestled inside a white cube, i.e., insider art. What is on display here? The temporary wall, by artist Brendan Fowler, is a showcase for others to use at their artistic discretion. (The premise is reminiscent of Gaylen Gerber’s gray supports.) For his contribution to the wall, Troy Briggs refurbished the structure, cleaned it, sanded it and repainted it. Was it object worship or housework? Finally, Briggs elevated the t-shaped wall atop cans of tuna, giving it the hovering effect of a Tony Smith minimalist cube, but the tuna winked with irony.
Through April 28 at Shane Campbell Gallery at the Suburban, 125 North Harvey, Oak Park. 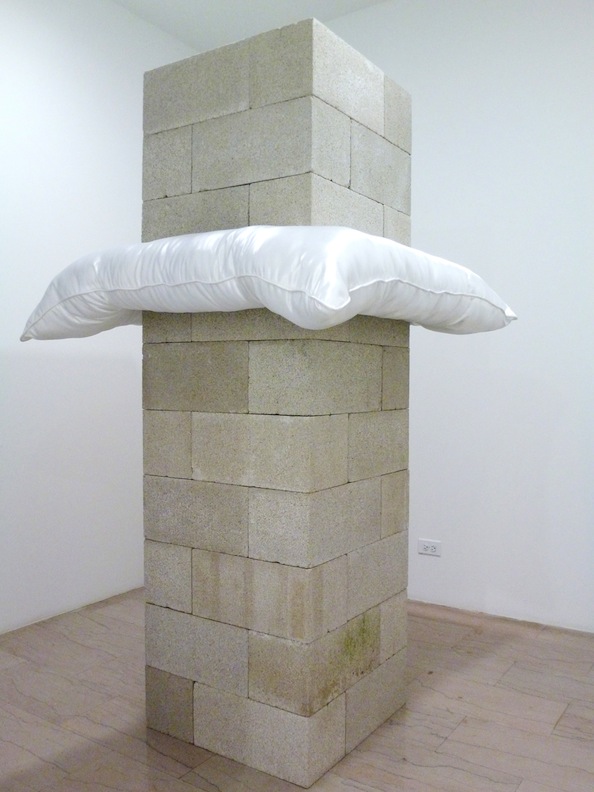 Rafael E. Vera at Bert Green Fine Art
In the exhibition “Nothing Concrete,” two sculptures endanger pillows, squashed by concrete blocks. The fluffy white pillows, asphyxiated by the pressure of concrete, bloat at the edges for escape. These simple, symbolic sculptures, like totems, speak of hardship and unrest, of being trapped and squeezed beneath something—but what? The detail remains buried in these moody, funerary sculptures, but a feeling of imprisonment pervades. The accompanying large, stark graphite drawings of trompe-l’oeil stone walls echo the hollow dirge song.
Through April 27 at Bert Green Fine Art, 8 South Michigan, #1220. 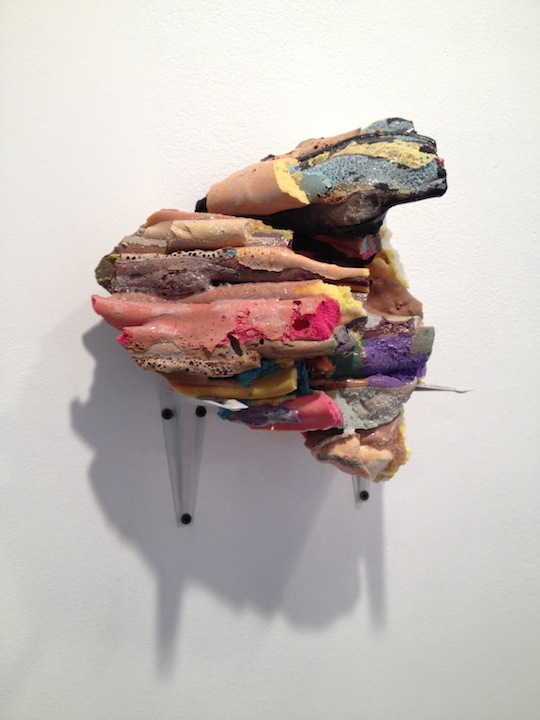 Haseeb Ahmed and Daniel Baird at Roots & Culture
Roots & Culture has been altered into a sculpture artifact gallery, in “Has the World Already Been Made? x4.” Plaster-cast galleries used to be common for the purpose of sketching world masterpieces. Haseeb Ahmed and Daniel Baird have taken this to another level, and a higher plane of consciousness, by making molds of public sculptures and architectural ornamentation, from Berlin, Moscow, Maastricht and beyond, arranging them in a funky, plaza-like object garden. Being in this gallery of colorful molds, with a tunnel, and sound art, is like being transported into the afterlife of art, where rainbow death masks and bloodless facsimiles hang as carcasses in a museum.
Through April 27 at Roots & Culture, 1034 North Milwaukee. 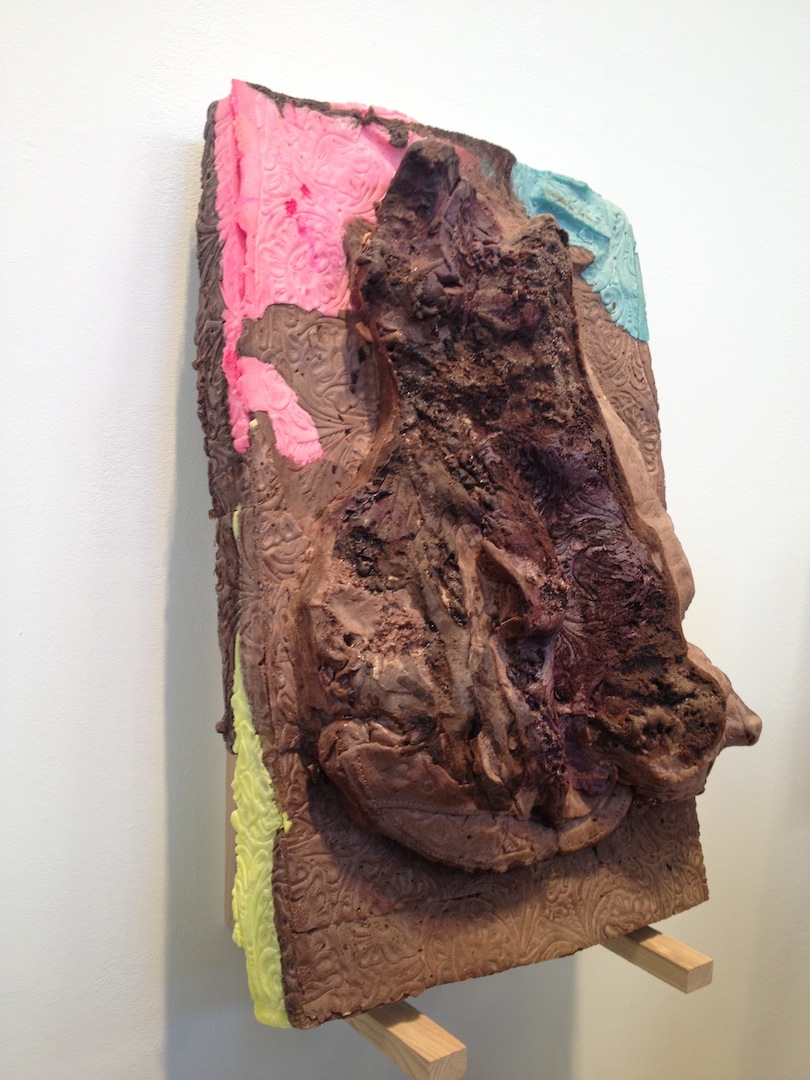 Jeremiah Hulsebos-Spofford at the Hyde Park Art Center
“Hall of Khan,” Jeremiah Hulsebos-Spofford’s spectacle of an exhibition, includes cast-foam objects that mimic, manipulate and molest public statues, especially ones featuring horses. (There is a unicorn modification kit, too.) Suspended from a contraption of the artist’s devising is a pink polystyrene and wood replica (of a replica) of London’s Crystal Palace. All of this, plus a live horse will drop in and hang out at the in-gallery stable a few times during the show’s run. The artist’s deep scrubbing of theories of urbanism, the town square, public memory, nationalism, and power objects all mingled together in this exuberant and decadent display. The artist’s mania for building things is rivaled only by the mania of his subjects— Genghis Khan, Joan of Arc and Ralph Lauren.
Through July 28 at the Hyde Park Art Center, 5020 South Cornell. 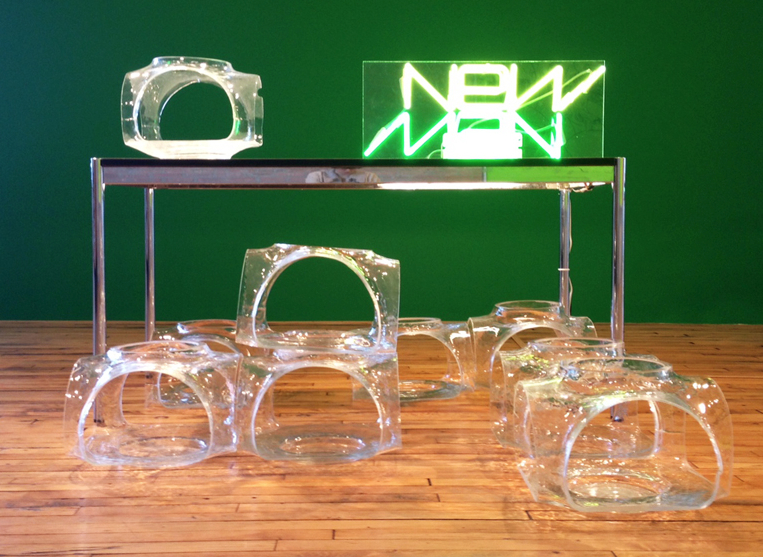 David Hartt at Corbett vs. Dempsey
The show is titled “for everyone a garden” and features hand-blown, stackable glass pods about the size of pumpkins. These interact with mid-century modern furniture and large-scale reference illustrations of modernist architecture. Hartt’s glass baubles are an unexpected shape, like thought bubbles. But if it is a show about architecture, why is Hartt creating furnishings? It’s a familiar critique: modernists wanted to integrate life, art and design, and we are left with well-designed home goods. (All this gets into Josiah McElheny territory, his blown-glass mirror bottles in infinite display cases). Sure, Hartt’s transparent sculpture pods are instantly collectible, and would make good terrariums, but you can visit the gallery’s neighbor, Circa Modern, to bask in the textures of the real good old modernism.
Through May 11 at Corbett vs. Dempsey, 1120 North Ashland.