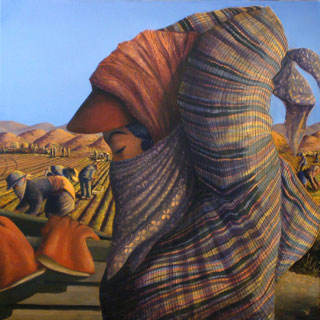 The depiction of Mexican farm workers became so connected to left-wing politics in the twentieth century, it is hard to remember that ever since Hesiod, rustic idylls were created for the landed gentry. How pleased the Duc de Berry must have been to contemplate his très riches domains cultivated by happy, hard-working peasants. The politics of the Chicago painters who moved to New Mexico a hundred years ago were less clearly defined. Some of the paintings, permanently displayed in a special gallery at the Art Institute, seem like anthropological studies of Native American life. A current exhibition of paintings of California farm workers by Eric Bellis seems to invite all three perspectives. In text that accompanies the exhibition, the artist expresses some concern for the makeshift facial barriers the workers need to protect themselves from the toxic pesticide in which they are immersed. But he has rendered their scarves as such alluring masks that it is nearly impossible to contemplate anything sinister. And, the quality of light is so delicious, some of the paintings glow like ornamental stained glass windows. In addition to his career as a post-punk, alt-country musician with the Mekons, Bellis is quite a painter—and the variety of effects suggests that he’s more of an explorer than a brand builder. In one painting, his farm worker is so entangled in foliage, it’s as if her glowing human face were just one more fruit of the harvest. But in another, we stand behind a worker relaxing by the side of the road, so we may share the end of a day spent in exhausting labor. He often seems to paint wherever a design is leading him, rather than following a photograph or narrative. The results are usually peaceful and gorgeous, but a ripple of restlessness keeps them from feeling either sentimental or somnolent. Some of these images could be used on the labels of California wine, others would better promote farm worker unions. But whether one sides with labor or management, human evolution has probably left something in the human brain that takes a special delight in scenes of people gathering food in verdant, open landscapes, and makes us happy to be alive. (Chris Miller)