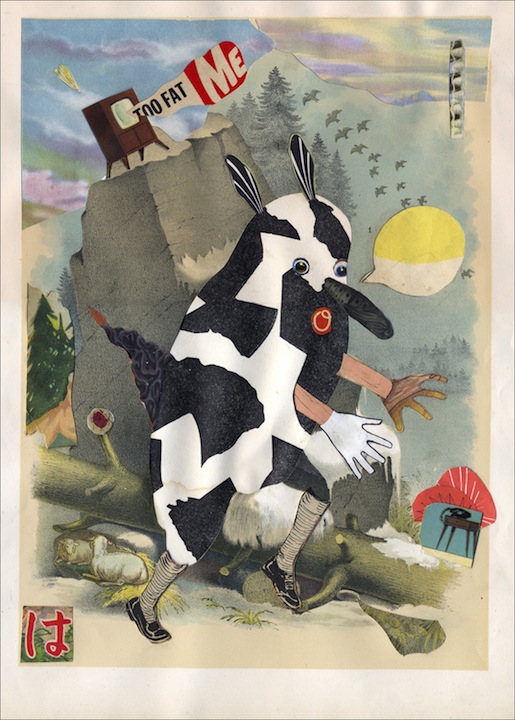 “Ring Ring, Too Fat Me (The Japanese Corner)”

Collage artist Lou Beach—whose nom de guerre is a clever Anglicization of the Polish surname Lubicz—has a great sense of humor. A longtime illustrator with a client list that includes the New York Times, Wired and Time, Beach’s humble beginnings (a child of immigrants) and youthful sojourns across the continent have endowed him with a sagacious insight into the American character. His gaze, like his wit, is razor sharp.

For his new solo show at AdventureLand, the Los Angeles-based artist has assembled a fine assortment of biting, surrealist-inspired works. Culled from the pages of the past, Beach’s source material is part Little Golden Book, part Sunday missal, combined in striking, and sometimes disturbing ways. Careful inspection yields numerous visual delights, such as the figure in “Honey, Please” whose Cigar-Indian head nose and landscape mouth elicit laughter and revulsion.

While the works’ meanings are seldom explicit, many of the nineteen fastidiously assembled collages satirize aspects of recent history. In the Stuart Davis-esque “Neighbors,” Beach employs crisp primary hues to depict twin suburban homes, one of which appears to be on fire—alluding, perhaps, to the sub-prime mortgage crisis.  “FEMA,” with its brilliant red houseboat, receding waters and jumble of tattered wreckage, seems targeted at the Bush administration’s inept response to hurricane Katrina.

When you consider that vast swathes of contemporary culture, from tastes in music to trends in art and fashion, are haphazardly plucked and peddled from the twentieth century’s reanimated corpse, collage, with its curious potpourri of image and meaning, is a near perfect medium for expressing the Frankenstein’s Monster that is twenty-first-century life. And few are doing it better than Lou Beach. (Alan Pocaro)

Through April 26 at AdventureLand Works on Paper, 1513 North Western.