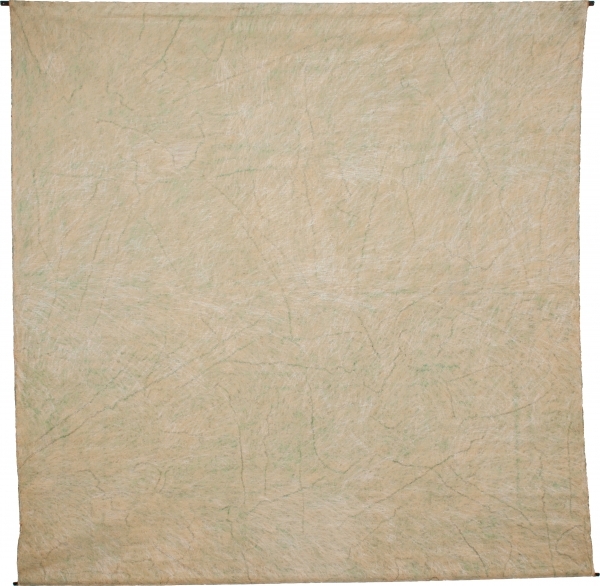 Shortly before creating the paintings in “Ghost: Rhythms,” in the early 1970s, McArthur Binion became the first African American to receive an MFA from Cranbrook Art Academy. The eleventh child of Mississippi tenant farmers, the painter’s uncomplicated aesthetic came to the attention of Minimalist luminaries Sol LeWitt and Carl Andre, and in 1973 the young painter was included in a significant exhibition at New York’s renowned Artist Space.

A combination of oil stick and Dixon wax crayon on aluminum, Binion’s surfaces are spartan but materially cantankerous. Paintings such as the ashen “Icecicle: Juice” or the Barnett Newman-like “Ghost: Rhythms” shiver with cracks and crevasses, revealing subtle glimpses of pastel hues buried beneath a mostly gray and white patina. The unit-based geometry of these nearly forty-year-old paintings evoke the Apollonian rationality of the intellect, and it’s easy to recognize their appeal to the New York cognoscenti of the time.

But it’s Binion’s larger, more rural works that stand out. These misty-toned “Circuit Landscapes Nos. V and VI” are freer in their deference to the Modernist grid, retaining the more ridged works’ austere coloration but with enhanced emotional purchase. Like ethereal heirloom quilts on antiseptic walls, they hang unpretentiously without stretchers, recalling an era when the salvation of the spirit was the sole reward for the African-American body’s cruel bondage. These paintings are guardians of a heritage that is both painful and poetic.

By maintaining an ongoing dialogue with his roots in the agrarian south, Binion’s paintings are largely symbolic, achieving a spiritual resonance that defies the typically reductive materialism associated with East Coast minimalism. And while a survey of works from the early 1970s may seem an odd way to inaugurate his first solo show with Kavi Gupta, in a society parched for meaning beyond its own narcissism, these phantom paintings feel right on time. (Alan Pocaro)