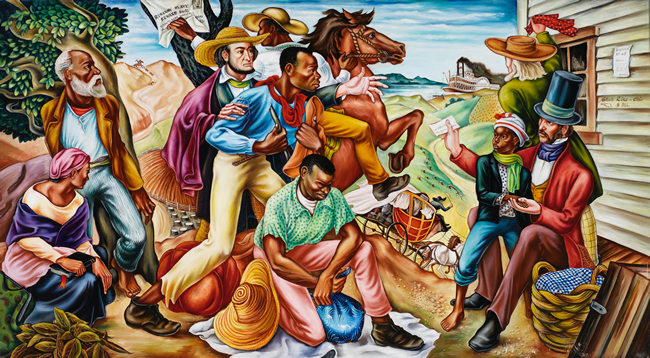 Founded by former slaves in 1867, Talladega College, in Alabama, commissioned six murals for their new library in 1939. Three panels tell the story of Africans aboard the slave ship Amistad, their successful revolt and legal aftermath. The other three panels commemorate the Underground Railroad, the founding of the college, and the building of the library in which the murals were installed. It’s an epic that begins with violence and ends with constructive cooperation toward higher education. The artist was Hale Woodruff (1900-1980), professor of art at a historically black college in Atlanta. He had attended art schools in Indianapolis, Chicago, Cambridge and Paris, and spent a summer in Mexico with Diego Rivera. He applied all this training to create a hyper-dramatic style of narrative illustration for this project. Action-packed with characters and details, the murals deliver their stories with a desperate formal energy that seems poised at the edge of the abstract expression that the artist would practice in his later career. This is not a staid historical pageant, like the WPA was putting up concurrently in many public buildings. Rather, the Talladega murals were more like a passionate “I have a dream” declaration in the heart of the Jim Crow South. Every narrative detail screams for attention in all the glory of the strong primary colors to which they have recently been restored. After this national tour, the six panels will once again encircle the walls of the Talladega College library, though I wonder how any student could focus on textbooks beneath this turbulent spectacle. Included in the exhibition are several of the artist’s earlier paintings and a few of his other narrative murals, each of which seems to have its own ends and means. Woodruff was a serious scholar of painting, of which this exhibition delivers a taste; he deserves an extensive retrospective. (Chris Miller)

Through June 16 at the Chicago Cultural Center, 78 East Washington