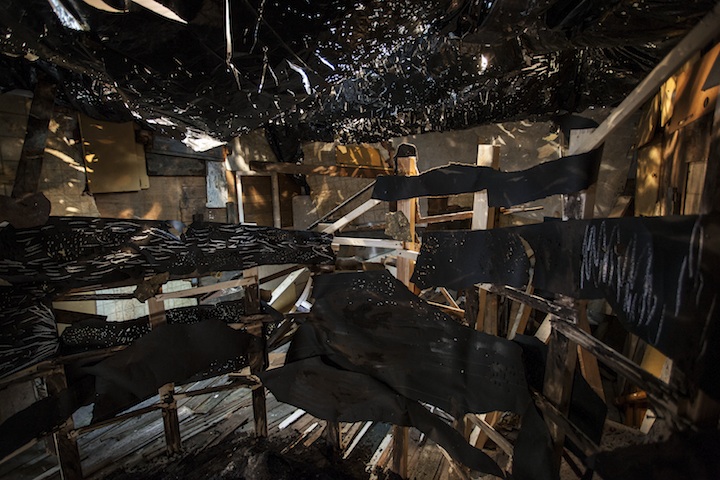 Abigail DeVille wages war upon space with all the multifariousness of Rogers Park in her exhibition, titled “XXXXXX.” The gallery’s location in Rogers Park is a stone’s throw from the original delineation between settlers and Native American tribes, and is set amidst the most heterogeneous neighborhood in a city whose dividing lines shine bright enough to be seen from outer space. “XXXXXX” is culled from the detritus of a disparate place, pieces thrown against one another in a display of beautiful violence that evokes both the fury and haunting pulchritude that is the inevitable result of the gnashing, bloody entropy and fornication of so many moving parts; creation is, by definition, a messy process, and DeVille does not shy away from the gore.

The gutted and flayed remains of a perdition-afflicted building festoon the installation; the floor, composed of all manner of scrap wood, snaps, moans and breathes below one’s feet in an unsettling combination of texture and sound—there is a true sense of discomfort in finding our flooring so strewn, a sure sign, as anyone who has been in abandoned or disaster-stricken areas can attest to, of distress, that civility does not live here, that something is wrong, that you should not be here, whispers of that old saying, where angels fear to tread—while the sagging sky, black as ink and dotted with innumerable buckshot stars, as if pierced by a celestial shotgun, hangs oppressively overhead, brushing up against the outer edge of personal space.

Along with the dizzying array of textures, of which it would take multiple eyes multiple viewings to properly catalog, the physical encroachment upon the viewer’s being is the exhibition’s defining feature. It is not enough for DeVille to dominate the expanse given to her; she must touch upon yours, as well. A rickety redoubt, built claustrophobically around brick columns, contains ashen horrors that sharply focus the marrow-snapping melancholia of the floor, while a bottlenecking hallway pushes one against the yawning, hollow eye sockets and dangling lids of cabinet face frames and presents the farcically tragic sight of a door knob, clinging desperately to a narrow shaft. One must actively twist and avoid these elements, before opening up into a vast (by the exhibition’s severely intimate standards) resting ground where more of the building’s misshapen bones are laid. Bedposts and other limbs rend from their hosts, wooden toilet seats, chairs, and one stoic, sickeningly pallid floral wingback chair provide a beautiful roundness and fullness amid the cacophony of angles.

Resembling a chaotic cocoon or the drippings of a slovenly beast, the remains of “XXXXXX” are already creating, of their own accord, their own beauty; upon escaping from beneath the hopeless tresses and between the dystopian pinch of the neck, one is greeted by dancing dust motes illuminated by the gashes torn in the onyx ceiling, and residing near the doorknob, glistening, is half a spider web; sans its hideous architect, irrevocably damaged and all the more beautiful for it, that gossamer structure is a microcosm of the creation-destruction cycle in which “XXXXXX” revels. (B. David Zarley)

Through June 1 at Iceberg Projects, 7714 North Sheridan, by appointment.