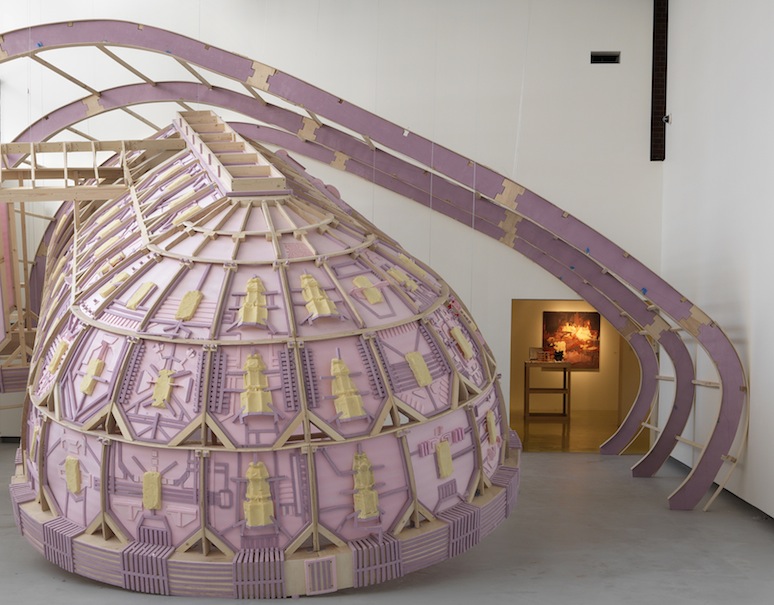 It’s not all that surprising that a man whose work takes jabs at power symbols and the concept of reverence would have the chutzpah to bring live horses into the esteemed Hyde Park Art Center.

Though not present when I visited (they will make scheduled appearances during the show’s run), horses clearly influence Jeremiah Hulsebos-Spofford’s sprawling, ambitious installation. Throughout human history, horses have enabled human movement, from the physical, moving humans across continents, to the ideological, as culture spread as a byproduct of warfare. Horses also mean dominance. Cities around the world are dotted with statues of Great Men sitting astride their noble mounts, usually erected out of some immutable material like bronze or marble because their significance is meant to be permanent and unchanging. The Chicago-based sculptor spent seven months constructing his meditation on what happens to monuments when the unquestionable greatness they represent crumbles in the face of a society that no longer believes in such a thing. “Hall of Khan” is the result, and it doesn’t disappoint.

With such heavy subject matter, it would have been understandable for Spofford to have taken a solemn tone, but his sculptures, photographs and pen drawings are visceral, fantastical and funny. At times he is a little too cheeky (there’s a collage of stamp-sized photographs of monuments with a picture of a Vienna Beef hot dog thrown in.)

Overall, it’s a wonderful vandalization of power structures and their physical apparati, culminating in the titular “Hall.” “Hall” is a replica of The Crystal Palace, an architectural wonder of the Industrial Age originally built in Hyde Park, London. Made out of found and disposable material, “Hall” is suspended from the ceiling and appears to be frozen mid-crash, like a pink polystyrene Hindenburg. It’s a looming metaphor for the silliness of hubris, and worth the trip to see the show all by itself. (Meredith Wilson)

Through July 28 at the Hyde Park Art Center, 5020 South Cornell.