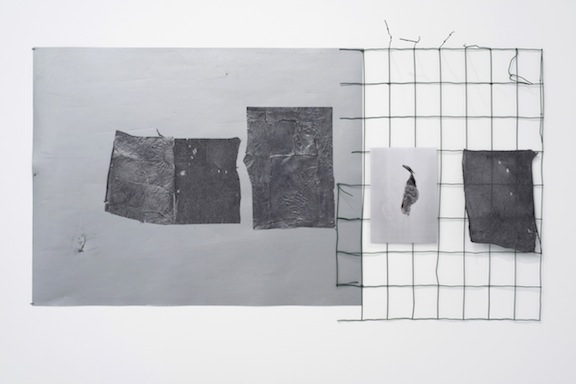 Kate Levant first rose to prominence in 2009 while still a graduate student at Yale University. In a prime example of silver-lining’s good fortune (or incredibly well placed connections), a proposed blood-drive-as-performance piece denied by the university’s administration was brought to the attention of New York dealer Zach Feuer. A summer show curated by the young Chicago native quickly ensued and since then, Levant has ascended to art-world heights at rapid pace, with solo shows in New York, inclusion in the 2012 Whitney Biennial, and a two-year stint as artist-in-residence at the Rijksakademie Amsterdam.

Like the late Robert Rauschenberg, Levant’s practice is omnivorous and her mixed-media installations embrace the materials of everyday life without prejudice. Fabric, corrugated plastic, thread, even the remnants of a burned-out Detroit home have all made appearances in the artist’s oeuvre. The bent, twisted, tattered and colorless materials that comprise the forms in “Inhuman Indifference” are no different, frequently having been altered in idiosyncratic and engaging ways, but remaining eminently, and recognizably themselves. 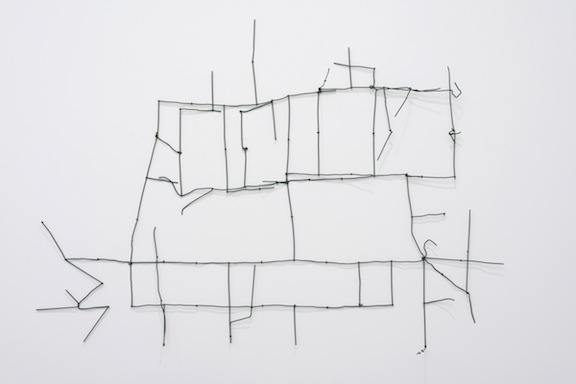 Though sacrificing nuance, the enhanced clarity of her humorously titled sculptures do, however, advance a rich language of feminine symbolism that extends well beyond the tired limitations of narrowly conceived gender politics. In fact, “Inhuman Indifference” as a whole is permeated by exceptionally subtle and sublime themes of growth and fertility signified by the artist’s use of earrings—a particularly potent sign of female sexuality in some North African cultures—as well as images of trees and birds in addition to the preponderance of hosiery, and shaped garden fencing.

Suggesting that an artist is a medium, a conduit between forces seen and unseen, seems like an antiquated notion in the age of dark matter and the Large Hadron Collider. But Levant’s artist statement indicates that she’s cast herself in this role, stating: “The material, the substances and subjects themselves, seem to be what has the whip in them…I don’t feel in charge of the dynamic.” By allowing the materials to work through and on her, Levant has opened herself up to engaging with universal expressions of feminine forces that are neither inhuman nor indifferent. (Alan Pocaro)