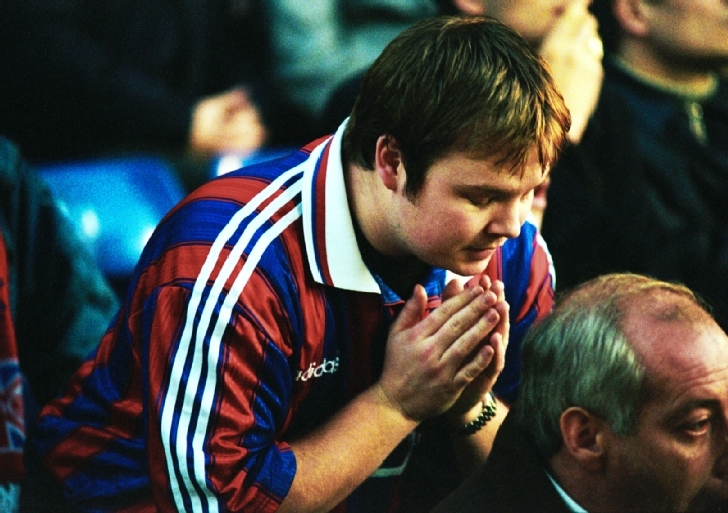 In the world of sports, spectators are fanatics. And fanatics can only grasp the seemingly unexplainable psychical prowess of professional athletes as artful renditions of otherworldly beings. The media, on the other hand, is complicit in the creation of these false idols. Their job is to provoke a calculated emotional response on the spectator and to have them spend their hard-earned cash on trivialities worn or endorsed by their idols.

Canadian artist Brett Kashmere responds sarcastically to the ways in which spectators place their hopes on the shoulders of these false heroes. In “Anything But Us Is Who We Are,” from 2012, a diptych that consists of a burned LeBron James Cavaliers jersey and a flat screen displaying the video game NBA 2K10, we see LeBron’s digital clone acting like a puppet, locked in perpetual practice mode on the center of the court, dribbling the ball while giving his back to his fan base. Perhaps proof that money means much more to professional sports than civic pride and loyalty.

In another great piece by Kashmere, “Valery’s Ankle,” from 2006, parallels are drawn between competition and national identity. Here the artist constructs a pseudo documentary based on the 1972 Summit Series hockey matchup, which had Canada’s ultra-aggressive team competing against the classy Soviets. Tough words like “vengeful” are used to describe team Canada as we see various vicious fights amongst players, official documents, newspaper clippings and historical footage. Kashmere’s engrossing narrative eventually led us to believe that hockey was more than just a sport—it was a proxy for the Cold War.

Violence is also present in Julie Henry’s two-channel immersive video installation “Going Down,” from 1999. It shows footage captured at the conclusion of a soccer match. On one side of the wall we see the ecstatic faces of fans of the winning team, while the other are the sad-looking and frustrated faces of the losing team.  Emotions run high, especially on the losing side. You can feel the frustration of those spectators; they’re like ticking time-bombs. It is much like those faces we see on our screens any given Sunday when we all gather to watch American football, a game in which violence is only natural.

MoCP is playing its cards right, reaching out to a Michigan Avenue audience that consumes sports twenty-four/seven. It has a potential blockbuster on its hands. (Pedro Velez)