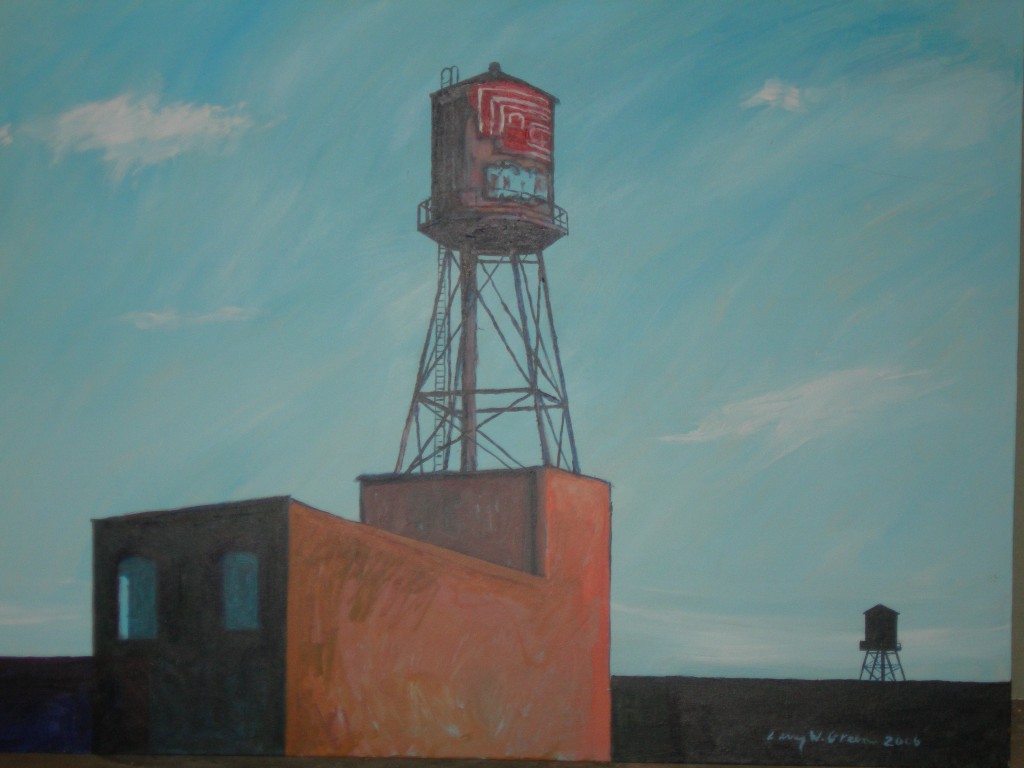 They have dotted the skyline for longer than anyone remembers. Brawny artifacts of redwood or cypress, the water tanks are like forgotten but proud old men, once employed, now replaced by sprinkler systems, their modern counterparts. You might have noticed them from the corner of your eye, but artist Larry W. Green observes them with the curiosity of a biologist studying an endangered species. His paintings reveal the graphic strength of the iconic forms, stark silhouettes amid silent cityscapes.

Green’s water tanks, as well as his book of photographs and paintings on the subject, will be featured on May 2nd at Fortunate Discoveries on Armitage. One-hundred copies of the slim volume, “Water Tanks of Chicago: A Vanishing Urban Legacy” (Chicago: Wicker Park Press, 2007), will be offered for free.

A legacy of the Great Chicago Fire of 1871, the tanks were created so that every public building and warehouse would have its own means to fight fire. It was an ingenious solution, powered by the simple force of gravity, in an era before there were electric-powered water pumps.

Created by barrel-making immigrants from Sweden and Germany, the sturdy tanks are ghosts of Chicago’s past, a memory of industry, progress, and commonsense, as well as the rising of a new city from the ashes.

Ordinances have been sought to prevent these commonplace yet wondrous structures from being torn down, and Green is still doing what he can to ensure they are not forgotten. 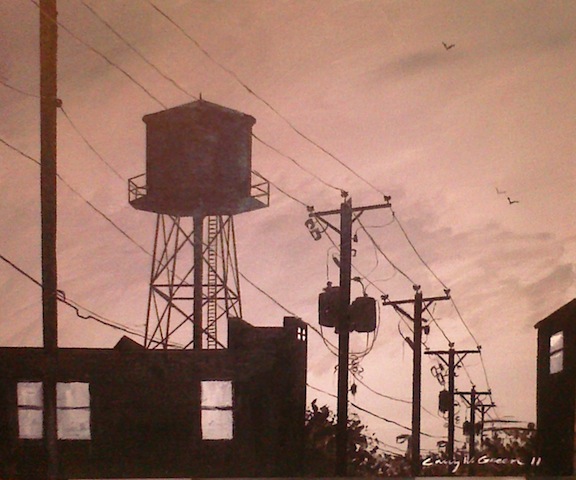 “When people see my paintings and read my book they begin to see them or are reawakened to their existence. This is important, for as they begin to vanish we understand the need for preservation.”

Green’s tanks are sculptural, their dark, powerful forms backlit by sunsets or cerulean skies. Towering high above buildings, intersecting with telephone poles and wires, these are monuments to our city, to our “big shoulders” industrial heritage.

In his forward to “Water Tanks of Chicago,” Anthony Jones, past president of the School of the Art Institute of Chicago, writes, “Many places have water tanks; they’ve been fixtures of the urban landscape in most American cities and towns. But Mr. Green’s water tanks belong to Chicago.”

The creaking old structures may not be considered architectural wonders, but they’re part of our visual landscape and urban history. Once numbering in the thousands, fewer than two-hundred tanks now remain. Although they might be crossing over to the big city in the sky, Green’s images honor the legacy. (Mary A. Osborne)

Larry W. Green will be giving away and signing copies of his book from 6pm to 9pm on Thursday, May 2 at Fortunate Discoveries, 1022 West Armitage.