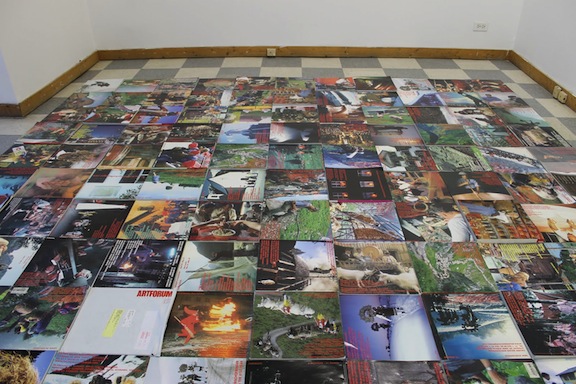 At The Storefront, Erik Wenzel asks us to literally walk all over the sacred pages of Artforum while picturing ourselves simultaneously in Logan Square and Appenzell, Switzerland. In the artwork titled “Appenzeller Landschaft (Appenzeller Landscape),” the artist places his personal collection of magazines, from 1990-something to the fiftieth-anniversary issue (September, 2012), in an arrangement on the floor, tiled backside-up in a Carl Andre-like grid. All of the Artforum back covers display a quaint scene of traditional Swiss life in Appenzell, the hometown of gallerist Bruno Bischofberger, who has been renting the back cover space since the 1980s to advertise the exhibitions at his blue-chip gallery in Zurich.

Visitors to Wenzel’s exhibition will experience a slight topographic shift in the grid underfoot, some issues thicker, some thinner—the thickness of the volume often dependent on the economic climate of when it was published, as the number of paid ads fatten or shrink the monthly tome.

Two identical but reversed Roman Signer (also Swiss) postcards on the wall comprise the other artwork in the show. To view the two postcards, visitors must traverse across Bischofberger’s ads. There is something pleasurable about sliding around on and tearing magazines with your shoes (particularly Artforum); but it’s a banal experience, one most people have experienced while cleaning out a garage. In fact Wenzel kept his stash of art magazines in this gallery’s basement while he temporarily lived in Berlin. Wenzel’s grid deteriorates after visitors stomp on dog-eared, curled and torn pages, tarnishing like the edges of a minimalist sculpture kept in storage for fifty years.

The exhibition’s title, “Fernweh,” refers to the German word feeling of wanderlust, or a body’s ache to be in another place. Recently on Facebook, art critic Jerry Saltz pointed out that Bischofberger’s gallery hasn’t shown a female artist since the 1980s; additionally, Bischofberger’s images depict the rural Swiss lifestyle as charming and nostalgic, a backdrop for his exhibitions, rather than anything of its own substance or history. Wenzel unquestioningly treats these back pages like greeting cards, applying their readymade affectations to inspire “Fernweh” in the visitor. (Sofia Leiby)

Through May 12 at The Storefront, 2606 North California.