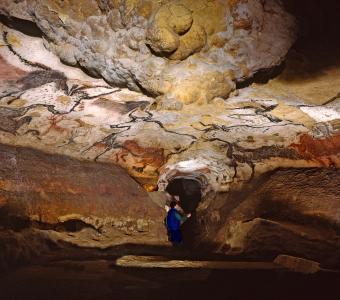 American museums once displayed rooms full of plaster casts of famous sculpture as a way to fulfill their original mission of bringing European high culture to the hinterland. (Reproductions of the Parthenon frieze can still be seen high above the grand staircase of the Art Institute.) Since originals are far more precious, and classical art no longer sets the cultural standard, museums dumped their plaster cast collections of ancient, medieval and Renaissance sculpture decades ago.

But what if the originals can no longer be put on display anywhere? The Lascaux caves, in southwestern France, are the setting of the most celebrated Paleolithic cave paintings in art history, and were permanently closed in 1963 due to rapid deterioration. A concrete reproduction, Lascaux II, was built nearby to accommodate viewers. Now, with advances in technology, the rough, complex surfaces of the original cave walls have been digitally recorded and reproduced within a single millimeter onto sheets of fiberglass. The resulting copies, called Lascaux III, are now on international tour, with a stopover at the Field Museum.

Five panels, presenting five selected detail areas of the cave paintings, are on display. Representing about five-percent of the original painted cave surfaces, they have been raised several feet off the gallery floor so visitors do not need to crouch down to view them, as they would if in the original site. A few wax-museum figures in caveman costumes have been placed between them, apparently more to entertain children than to suggest that the cave was once used as a daily living space. 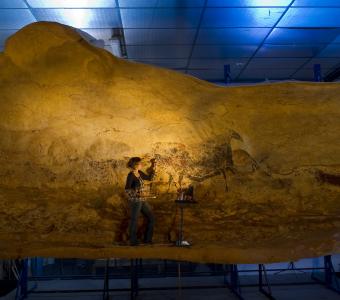 The convolutions of the new exhibition’s cave walls offer an experience of the paintings entirely different from printed and TV or computer reproductions. Seventeen-thousand years ago, artists incorporated those convolutions into their painting, to create a kind of pictorial space. One panel shows a pair of bulls that convincingly charge out from the wall.

The atelier of Renaud Sanson has done a careful job of applying pigment to the faux cave walls, but the drawing is still dependent upon the interpretation of a contemporary artisan working from photo images on a flat computer screen. The results suggest that a naturalistic and spatial kind of animal drawing pre-dates the pictographic and more schematic styles of other early art. These copies lack the aesthetic intensity of other celebrated masterpieces of world art, but what about the aesthetic quality of the originals? Are they any better?  Since none of us will ever see the original, that question awaits a future technology  able to offer indistinguishable copies of the pigments as well as cave walls. In the meantime we have an exhibit that is somewhat educational and a little entertaining. (Chris Miller)

Through September 8 at the Field Museum, 1400 South Lake Shore Drive.