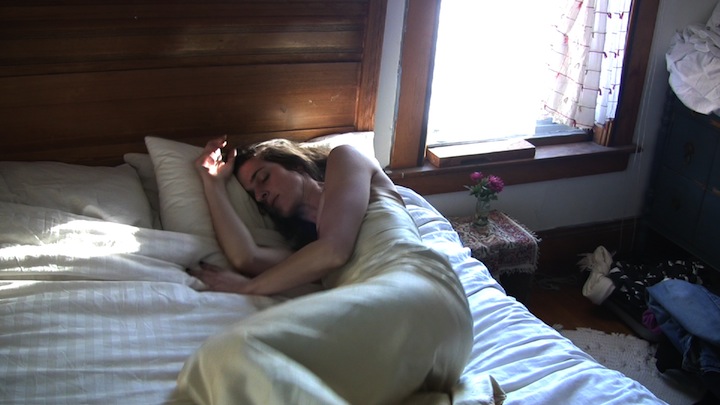 Chelsea Knight’s twenty-three-minute short video, “The Breath We Took,” is a completely absorbing experience. Shot earnestly in documentary style, the work weaves its matriarchal narrative around four generations of Knight’s family, exploring differing views on marriage and motherhood and how those notions—and their attendant trepidations—inevitably affect their relationships with each other. The pastoral New England setting, the intimate, confessional style interviews, and an abiding sense of authenticity envelope the viewer in this vivid, emotionally rich portrait.

Knight clearly understands that film, in contrast to just about every other visual medium, is a natural intersection of image and language. A particularly effective scene involves Knight and her mother discussing the myriad joys of the orange-tinged liqueur Grand Marnier set in a kitchen ablaze with the wall’s rich orange glow. The scene follows a clip depicting Knight discussing her mother’s orange wedding dress. These visual-linguistic threads are smartly woven throughout the video, binding moments that otherwise seem unrelated, but you’ll need multiple viewings to really pick up on them.

In fact, by the second time through, the video’s spell starts to look intentionally permeable. What once appeared effortless and natural takes on a counterfeit air. Knight and company’s thoughtful, if vacant, stares are a little too polished, and scenes such as the family romp through the closet of childhood clothes sound and look staged. This tension between authenticity and affect, discussed at length in Knight’s anxiety-ridden soliloquies on child rearing, is the video’s (and the medium’s) abiding theme, marvelously embodied in the material form of the work itself.

Few would doubt the awesome power of moving pictures to move us emotionally as well as aesthetically. But for every “Chinatown” there’s a “Weekend at Bernie’s 2,” and in the wrong hands, video has been responsible for some of the worst (but not always unearned) stereotypes associated with contemporary art. So it’s as refreshing as it is rare to encounter work by an artist who is not only familiar with the conventions that govern filmmaking, but commands them. (Alan Pocaro)