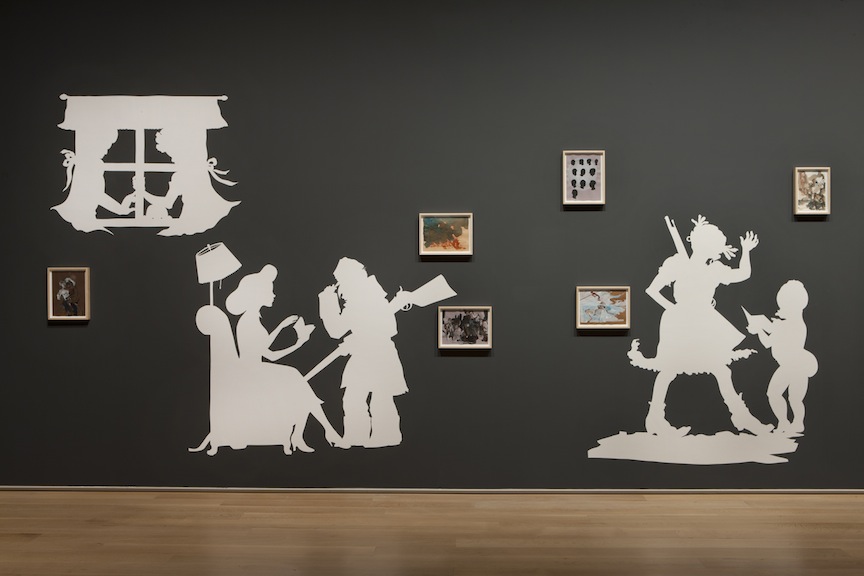 If brand identity is crucial to the success of the contemporary artist, few have got one as strong as the MacArthur Fellowship recipient Kara Walker. But, nearly two decades on, Walker’s trademark silhouettes and antebellum grotesqueries are showing their age, and the artist, undoubtedly aware she has cut herself into a stylistic corner, has been making strides to broaden her approach to installation.

In her latest work “Rise Up Ye Mighty Race” commissioned specifically for the Art Institute, Walker anchors the show with several mural-scale drawings and a plethora of small, variously framed studies. The signature silhouettes are still present, though play less large a role in this homage to imaginary race war.

The biggest problem with the show isn’t the mediocre drawing, though there’s plenty of it, or the pedantic, (not) shocking quotes like “integrate rape gangs” that are scrawled across her pictures. Rather, it’s Walker’s uni-dimensional approach to the vision that animates her work: race and racism.

Forty-percent of the U.S. prison population is black, though black Americans account for only fourteen-percent of the total nation’s population. The unemployment rate for blacks is typically double the national average (currently about thirteen-percent), and the graduation rate of black males is hovering just over fifty-percent. Of these grim facts Kara Walker’s tiresome caricatures, which trade upon the overt hatred of a rapidly vanishing era, are eerily silent. (Alan Pocaro)

Through August 11 at the Art Institute of Chicago, 111 South Michigan