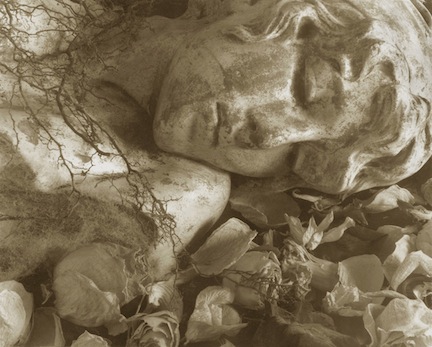 “And Then…” by Pamela Hobbs

An emblematic representative of the most sophisticated contemporary photo-art, Pamela Hobbs combines a multitude of postmodern tactics (use of vintage photographic processes, embedded conceptual import, use of text, coloring her images) with surrealism, sentimentality and a decidedly serious feminist-modernist reflection on mortality. As improbable as the mixture might seem to be, Hobbs’ sepia and toned black-and-white prints of curio cases filled with the leavings of expired life—figurines, pictures, dolls, and playing cards, for example—and scenes of decay (never decadence) seize us with an unrelieved sadness about the ironies and eeriness of things past. In one of her most direct images (without the text and elaborate backgrounds of the others), “And Then…,” Hobbs crystallizes her sensibility, showing us the fallen, pocked, and scarred head of a statue lying under desiccated and spiky tendrils on a bed of withered rose petals. In Hobbs’ vision, life is always unkind and it wears us down inexorably; yet we cannot rent asunder our attachment to its traces embodied in the objects that accompanied it and became personalized, as equivocal as they are. In Hobbs’ estimation, she has presented a feminist vision, but it is equally accessible to any man who surrenders his bravado.

In her color oblong panoramic-style photographs reflecting on adolescents and how they bridge the worlds of their families and friends, Margaret Wright seamlessly arrays multiple images of different scenes with different subjects abutting each other to create integrally themed scenarios, such as dances, parties, electronic gaming, dining, and just hanging out. Given the diversity of form and content within each panorama, it is neither possible to anchor oneself in a stable environment, nor to focus on a distinctive person; instead the viewer has to grasp the mood of each piece, which is always nuanced by virtue of its visual tension—enthusiasm coexists with indifference, intimacy with detachment, and self-satisfaction with apprehension, to name just a few of the burgeoning polarities. With a gently mordant sensibility that has always marked her work, Wright has confected a scene in which a beefy father sprawls on a couch next to a terribly anxious mother, and two teenage girls, whose heads have been cropped out of the frame, close in on them. The work is called “Graduation,” and we are left meditating less on the vicissitudes of the teenage years than on what we mean by celebration. (Michael Weinstein)