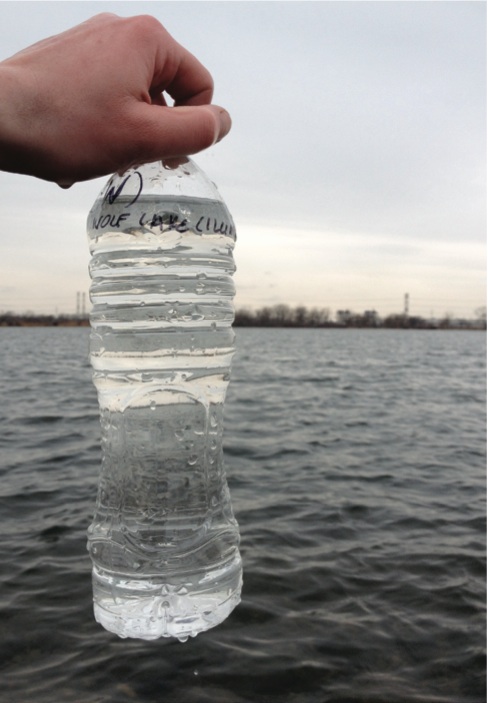 This is the fifth installment of the Visiting Artist column. Here, Marissa Lee Benedict reflects on several of her art-research projects, of “propositions.” Benedict shows at Threewalls (119 North Peoria) through June 13.

Located on the border of Illinois and Indiana, off of Avenue O, Wolf Lake is neatly bisected by the state border; an invisible geopolitical line made visible by a two-lane road running vertically through the middle of the body of water at a precise longitude of 87º31’W.

Wolf Lake was first brought to my attention a few months ago, as I discussed my need to find water sources from which I could collect algal samples; sites which would speak to my interest in finding dis/connections. While I was sitting in his studio a few months ago, David Allan Rueter mentioned that last year he had driven down to Wolf Lake to walk its shores, tracing the edges of the fractured lake by foot.

Walking the shoreline of Wolf Lake, it’s difficult to find soil, the road and dikes being mostly composed of slag, gravel and lakefill. I’m afraid that most of what passes for soil is, in fact, dirt: soil’s less microbially active cousin. Wolf Lake, along with neighboring Calumet Lake, was once among the most biologically diverse pockets in the Midwest. To take a water or soil sample from Wolf Lake 150 years ago would have been to collect a cosmic paraphernalia of organisms. A century of heavy industrial use by the surrounding steel mills has radically reduced this biodiversity, but despite this, I have hope that the samples I collect will come alive. With the chill of winter on the lake, the ground is still frozen in early March. Many of the organisms will be dormant, arrested in their metabolic activity by the freezing cold. I’m un/certain of what I will find as I dip my hands into the frigid waters, my fingers going numb and lifeless as I walk back and forth across the state line, filling two containers: one from the Indiana side of the waters, and one from the Illinois.

As I walk, I look down. The gravel is littered with chunks of iron, pitted moon rocks whose surfaces are marked by the radical shock they have received—molten metal rapidly cooled by water. Railroad spikes litter the ground, and I pick one up from each side of the tracks and put them in my pockets: one to the east and one to the west.

The last time I picked up a railroad spike was two years ago, as I embarked on a collaborative proposition—a proposition of sprawling scale and dimension—with artist/philosopher Andrew Barco during the summer of 2011. 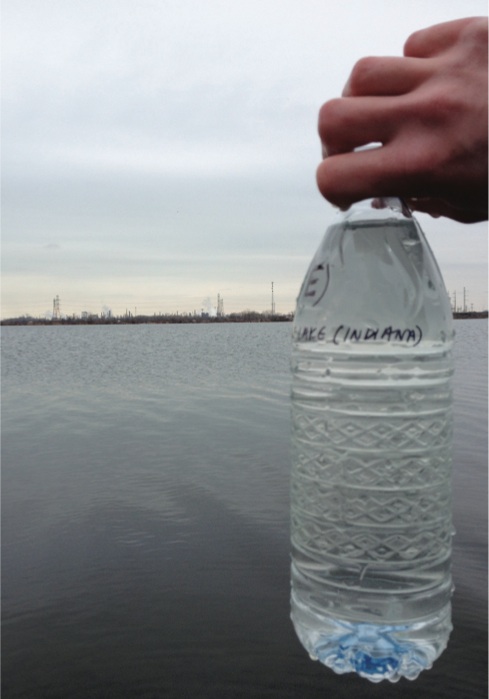 Andrew and I began discussing the possibility of working on a project together while traveling on the Chicago Metra to a part-time job in South Chicago. The proposition, later titled “H.Y.L.O.Z.O.I.S.M: How You Land Or Zoom-in On Inter-Subjective Matter(s),” was set in motion by the train, and was ultimately re/sited on two sets of abandoned railway tracks: the Bloomingdale Trail (an elevated railway track no longer in service, running east to west through Humboldt Park and Wicker Park) and the Chicago Tunnel Company’s underground mail carrier (an inaccessible narrow gauge railway built twenty to forty feet beneath the Chicago Loop).

One set of tracks above Chicago, one below.

Although my collaboration with Andrew was difficult at times—we put ourselves under an enormous amount of pressure to produce a complex body of work in a few short weeks—the conversations and conceptual strands we began to “felt” together have wound themselves inextricably into my own working process. My sense of dis/connection, of the simultaneously interconnected and fragmented nature of everything, has expanded exponentially out of our interactions that summer.

One of the most powerful desires that grew out of my collaboration with Andrew was the need to not only collect research on a site, but to venture out: to go on an expedition to physically “sample” the site, to dig into the ground or the bottom of a lake to collect something alive.

It was right after Andrew and I had finished the first draft of our “H.Y.L.O.Z.O.I.S.M” catalog, and summer was coming to an end, that I took a trip to visit my sister in San Francisco. While walking out of the basement of City Lights bookstore, where we had been spending the afternoon, my eye was caught by a book titled “Vibrant Matter: A Political Ecology of Things.” Intrigued, as it expressed something Andrew and I wanted to articulate through our use of the word “hylozoism” (a Greek word describing a sense of the world being materially alive), I bought the book on the spot and have been carrying Jane Bennett’s text with me ever since.

Bennett’s philosophy of “thing-power”—of vibrant matter—reinvests the material world with agency. It fore-fronts the “force of materiality,” creating a neologism to describe our actively networked interconnectivity, a worldview rooted in traditions of Shintoism, hylozoism and other animist philosophies. Bennett describes her idea of “thing-power” in the chapter of that title:

“Thing-power perhaps has the rhetorical advantage of calling to mind a childhood sense of the world as filled with all sorts of animate beings, some human, some not, some organic, some not. It draws attention—to an efficacy of objects in excess of the human meanings, designs or purposes they express or serve. Thing-power may thus be a good starting point for thinking beyond the life-matter binary, the dominant organizational principle of adult experience.”

Although sensitive to the linguistic limits of the use of “thing,” Bennett’s proposition of “thing-power”—of the world being radically alive on a micro and a macro level, from the mineral elements in our bones to the electricity running through our global networks—reclaims a space for wonder. A wonder that we are not only part of the world, but made of the world.