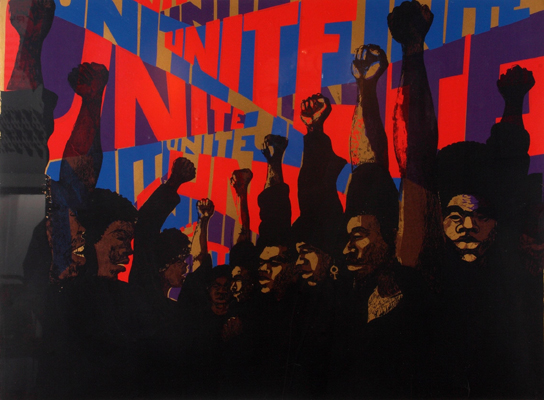 A venerable South Side institution of which many Chicagoans may not have heard is the starting point for a three-stage investigation of the artists’ group AfriCOBRA. A timely collaboration among several South Side arts institutions celebrates the origins, philosophy and impact of this group of artists.

AfriCOBRA (African Commune of Bad Relevant Artists) was the cultural counterpart of the Black Power movement. Most people are familiar with writers like Amiri Baraka and Nikki Giovanni, but Chicago moved into the 1960s with a very strong visual arts tradition located in Margaret Burroughs’ South Side Community Art Center in the 3800 block of South Michigan Avenue. Works in this exhibition by Elizabeth Catlett, Charles White and others associated with the center since the late 1930s, when it was established as part of the WPA, laid the groundwork for what was to come.

Stunning screenprints are among the works in “AfriCOBRA: Prologue—The 1960s and the Black Arts Movement,” as multiples have long been favored by activist groups for their non-elitist plurality. These are in a full range of color and refer to Catlett’s sculpture of proud people with arms raised high in the Black Power salute. In Barbara Jones-Hogu’s prints, the salute appears not as a gesture of violence but of liberation under a sky filled with the admonition to “UNITE.” Another section of work in the cedar-lined rooms (legacy of the Bauhaus’ Nathan Lerner, who designed the interior) explores the fusion of abstraction and activism, or in those days, social realism, in several paintings and a print. In “Ghetto” by Jose Williams, a very small photograph of a forlorn-looking boy floats surrounded by a large, agitated field of color, shapes and incised marks. Handmade posters from key exhibits in the group’s history are artworks in themselves.

In keeping with the collaborative spirit of the movement, students of University of Chicago art historian Rebecca Zorach have researched, curated and produced the interpretive materials for the inaugural exhibition. (Two additional shows will open this summer at the DuSable Museum and the Logan Center.) A full range of events extends the scope of the exhibits and invites the community to participate, even unite, in the rediscovery of the vivid cultural power of the Bad Relevant Artists. (Janina Ciezadlo)

Through July 7 at the South Side Community Art Center, 3831 South Michigan