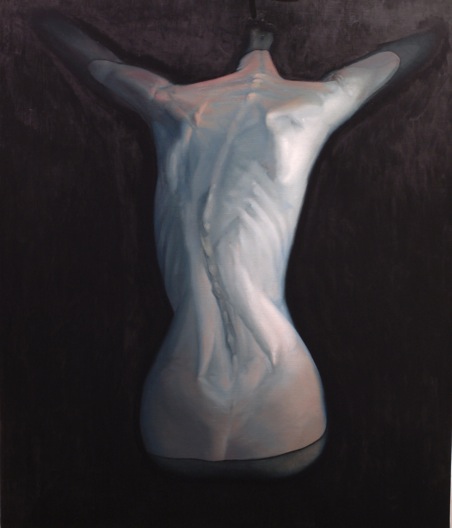 Contemporary symbolist painting is a hard sell in Chicago. It doesn’t revel in bright, sunny landscapes, gritty urban realism, or echoes of popular culture. As developed in the late-nineteenth century, it cultivates spirituality in a dark inner world accessible only to the artist/genius and those able to follow. As the Belgian poet Emile Verhaeren once put it, “It is not our faith and our beliefs that we put forward; on the contrary, it is our doubts, our fears, our boredoms, our vices, our despair and probably our agony.” 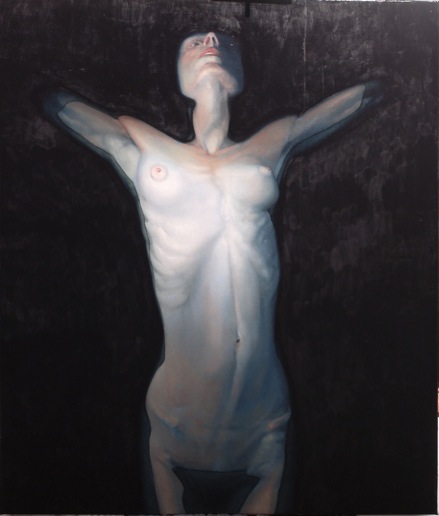 So, it is rather heroic to take a career in that direction, as David Abed has been doing ever since studying in a Classical-Realist atelier, the School of Representational Art, in the 1990s. His current body of work is quite a challenge. His single, large nude female figures resemble the flayed figures once commonly used to study human anatomy (called écorché), and he has partially immersed them in dark, limpid pools of water. His stiff, almost geometric formalization of the flesh makes the figures feel like biological specimens floating in formaldehyde. Whatever this arrangement may symbolize for the artist, the figures feel hopeless and morbid, like that tragic life-in-death that many of us will experience with senescence. Though painted with precision, they are not especially beautiful. But the artist also makes paintings that are more observational than symbolic, and this show includes two still-lifes and three partial nudes. They also feel a bit ghostly and heavy with meaning, but here that plays off against the artist’s attention to natural form. The results are quite appealing, and possibly just as meaningful. (Chris Miller)