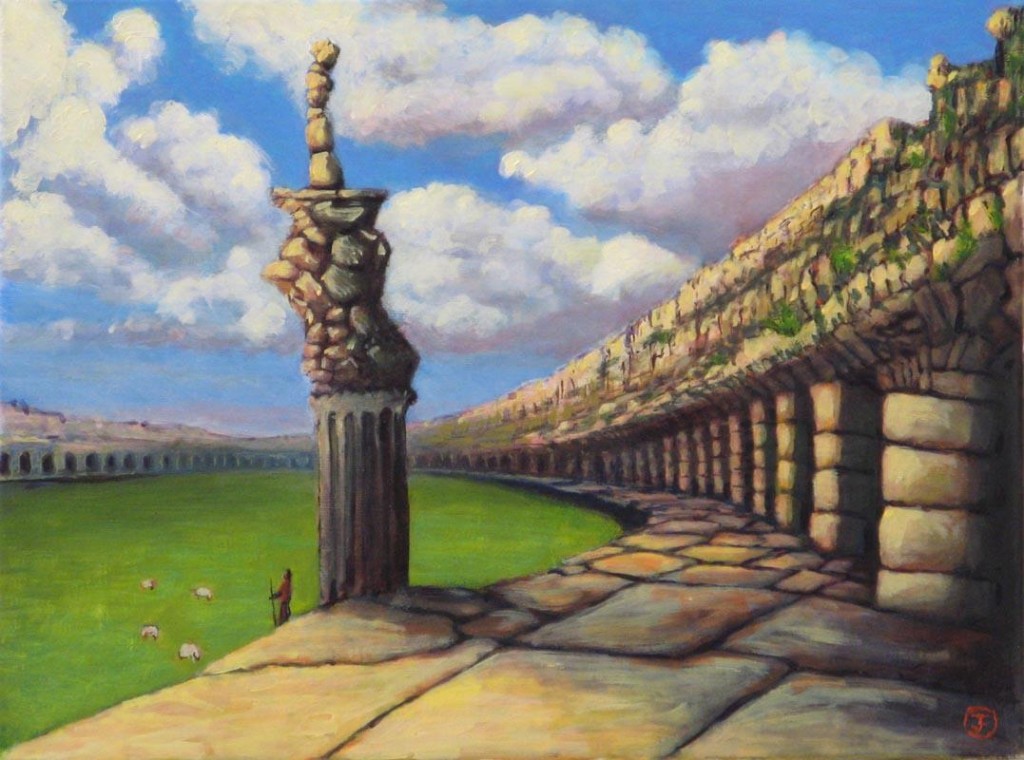 Exhibitions of successive generations of artists from the same family unavoidably document the change of fashion, but the three generations of artists from the Livchitz family also straddles two different cultures, Soviet and American. As a member of the Soviet Artist’s Union, the grandfather, Chaim (1912–1994), did what most professional artists have done throughout history: glorify the ideology of rulers and priests. Though we might disparage that as propaganda, it’s hard to find a society, including our own, that has survived without it, and Chaim convincingly, if predictably, imagines men of action as strong, intelligent and reliable. His work reminds us that such positive images have been unpopular from the mainstream American art world for several generations. His American-born grandson, Jacob, is predictably ironic as he creates monumental, pseudo-propaganda for that monster of the Cambodian killing fields, Pol Pot. Irony also saturates Jacob’s imaginary landscapes that feature the whimsical ruins of a lost civilization that owes as much to Disney World as it does to Greco-Roman antiquity. But the work of Chaim’s son, Misha, is far removed from any such social commentary. Misha grew up in Belarus and immigrated to Chicago in 1980. His early paintings, landscapes and still-life are assertive and melancholy in the great Russian tradition. You really can’t decide which is more beautiful, the bowl of fruit or the brushstrokes that depict it. Then he turned to figure sculpture as he began a new life in America, working in that early twentieth-century classicism that patiently works a strong and simple idealism into the complexity of how people actually appear. If it has any social message, it is that human goodness is not a fantasy; it’s as real and necessary as clean air and water. Only one Livchitz, grandfather Chaim, was a professional artist, and even then, much of Chaim’s work was done only for himself or family. Misha is an electronic engineer, and Jacob is a New York City schoolteacher.  But all three have been no less serious about visualizing what they feel is important, and it always relates to the actual world around them, to either glorify, criticize or simply enjoy it. (Chris Miller)

Through May 28 at Palette and Chisel, 1012 North Dearborn