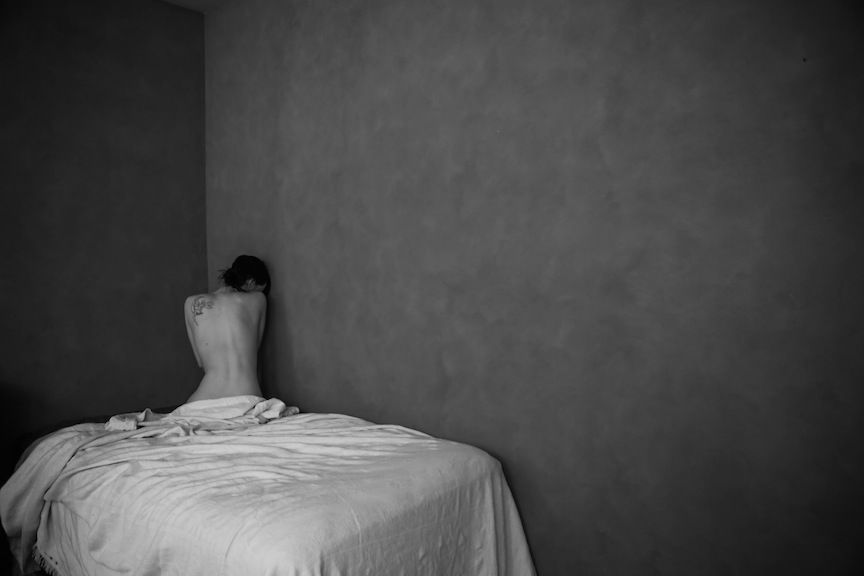 Right up front about using photography to express her ever-incomplete journey of self-discovery, Jodi Swanson (Alempijevic) does not specialize, deploying whatever technique and genre depicts the mood that she wants to represent to herself and communicate to viewers. Whether she is shooting in black-and-white or color; going straight or venturing into digital manipulation; posing models in formal studies or turning the camera on herself; or capturing slices of life on the streets, meditating on natural forms, or flirting with surrealism, Swanson is always intensely passionate—she is addicted to feeling and she is a consummate pusher who knows how to break through our emotional resistance.In the most moving image in her show, Swanson defies the conventions of the classical black-and-white sculptural nude, taking her subject from behind and at a distance, sitting on the edge of a bed, imprisoned in a corner, her head sunken beneath her shoulders and her arms hunched and scarcely visible—she is the essence of abject desolate beauty. Swanson can bring herself to accentuate the positive, but she is never far away from pathos. (Michael Weinstein)

Through June 9 at the Chicago Photography Center, 3301 North Lincoln