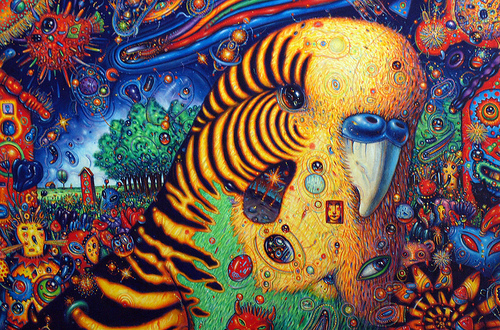 Meet three wild and crazy Chicago guys from the generation that grew up in the 1950s and sixties, back when the language of art had not yet been deconstructed and the Beatles had not yet met the Maharishi. Although John Kurtz, Paul Lamantia and Bruce Thorn are introspective, their artworks are hardly private, and rather than inviting you into their own pictorial world, the energy of each picture is always pushing into the world of the viewer. 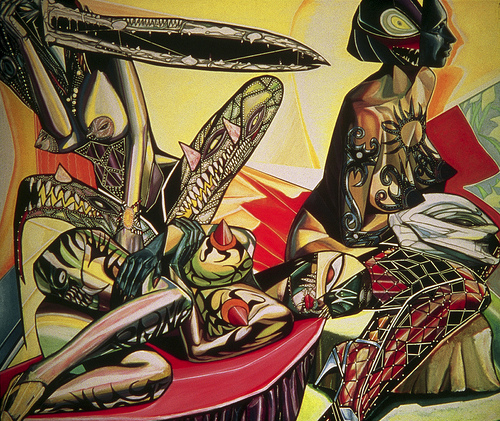 Most assertive, and most delightful, are the psychedelic extravaganzas of John Kurtz, whose fantastic imagery has even escaped his paintings to vegetatively spread throughout the gallery as colorful ceramic sculptures. Every sensual detail rewards the viewer with a happy surprise, and even if he has taken us to the happy land of the lotus eaters, unlike recreational drugs, there’s no miserable after-effect. Set beside this work, most other paintings, even good ones, feel a bit drab. 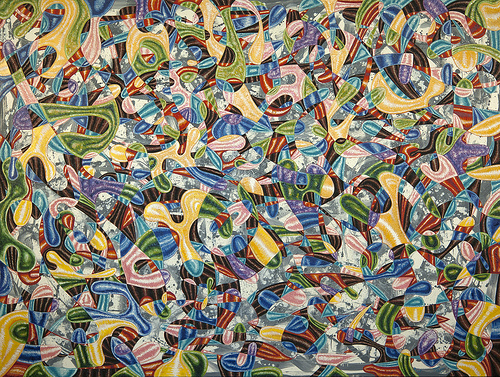 Paul Lamantia’s surrealist visions are just as intense and well done, but hung beside Kurtz, they do seem to be carrying way too much anger, stress and guilt. Even if Surrealists cherish their psychic pain, can’t they ever relax and enjoy themselves? Lamantia’s recent work, however, does seem more lighthearted than the darker pieces from twenty years ago that are also on display. Unfortunately, the paintings of Bruce Thorn suffer the most in the context of this show. Without either high-pitched ecstasy or angst, they feel a bit clinical, mathematical and academic, as if the artist had put his inner life under a laboratory microscope. His patterns require more attention to emerge from an all-over sameness, and they are not as beautiful as they are energetic. But though they might not hit you with shock or awe, they probably would be more amenable for daily visitation than anything else in the gallery. Like last year’s “Mutuality” exhibit, the UIMA has once again shown us three Chicagoans who have been making art for at least four decades, giving us a good feel for what it’s been like to live in our time and place. (Chris Miller)

Through June 2 at the Ukrainian Institute of Modern Art, 2320 West Chicago

John- You Rock. This review should double the value of your work. I am proud to be one of your collectors. Keep up the good work.