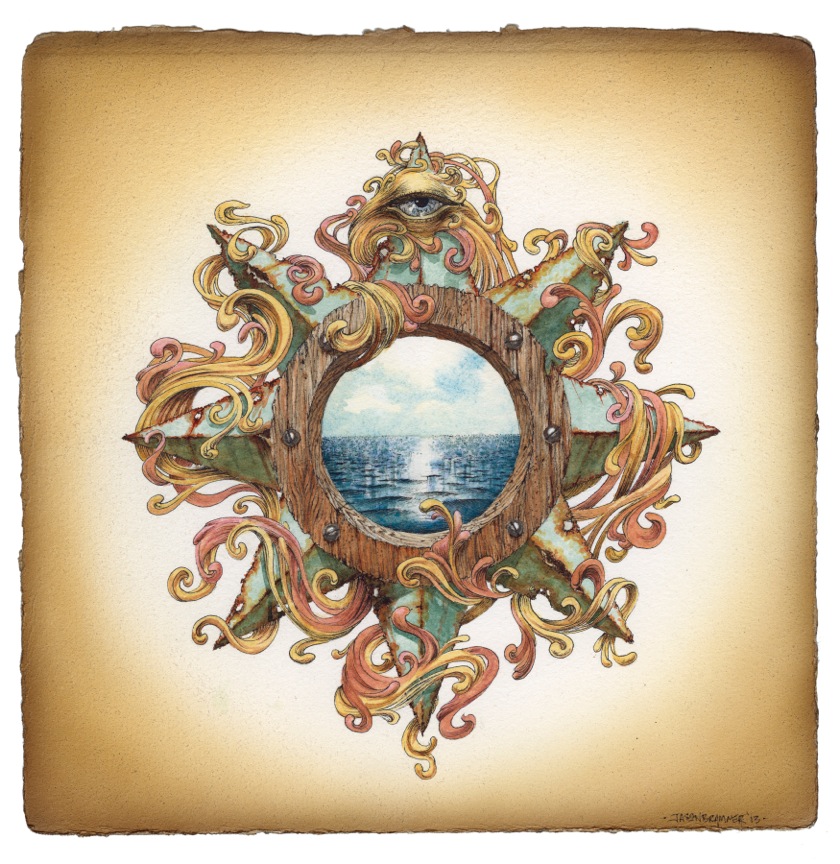 Like the English poet John Masefield, Jason Brammer has heeded the call of sea. The Chicago artist’s new solo exhibition, “Into the Deep,” explores the hidden mysteries down below in works inspired by nautical maps, navigational instruments and medieval bestiaries. The show, opening on Friday, June 7, at AdventureLand Gallery, features ink and watercolor drawings in addition to some distinctive Brammeresque mixed-media works that seamlessly meld hand-painted imagery with antique parts, salvaged wood and found objects.

The drawings have the look of medieval prints that have been water-stained and weathered with time. As is typical in Brammer’s work, it is difficult to tell what is real and what is painted. The decayed and rusted points of a compass rose encircle a porthole of weatherworn wood that appears to be nailed, rather than painted on to the antiqued watercolor paper. The porthole opens to a convincing ocean vista of sparkling blue.

Portals, or doorways between worlds, have been thematized by the artist in previous series such as “Gateways” and “Time Machines.” Brammer sees “Into the Deep” as a natural progression of these works. His new frontier is the sea, its metaphor and its mythological inhabitants residing below. 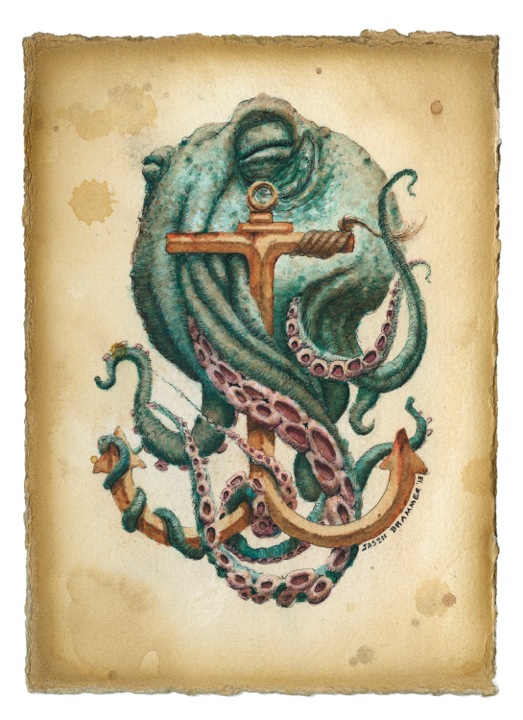 “Creature Of The Deep IX,”
india ink, watercolor and acrylic on paper, 2013

An intricately detailed, spiraling serpent rendered in India ink, watercolor and acrylic hints of the nature of the underwater world. “I see the creatures as a projection of humankind’s imagination or fears,” Brammer says. He then quotes Nietzsche: “Calm is the bottom of my sea: who would guess that it hideth droll monsters!” Artists in the Middle Ages took the beasts more seriously and conveyed images meant to frighten.

Medieval bestiaries, compendiums of both real and imaginary beasts, spoke the symbolic language of Western Christian art. Every animal, it was believed, contained an allegory meant for the benefit of humankind, their characteristics serving as a reminder of proper conduct. Brammer’s octopus is powerful but benign, even good. The creature, a totem of sailors, wraps its tentacles around an anchor as though telling us to approach life with faith, hope and strength.

Occasionally, hidden among tentacles or decorative scrollwork, is the all-seeing eye, borrowed by the Freemasons from the ancient Egyptians. A symbol of a consciousness observing the physical world, the eye has appeared in the artist’s work before, as have other esoteric emblems. Brammer has read some Carl Jung and like the interpreter of dreams, he swims in the realm of religion, mythology and folklore. He fishes for archetypes, mysterious images from the collective unconscious, which we recognize from long ago, if Jung is right.

Brammer’s mixed media pieces, such as “Binding the Boundless” and “The Illusion of Permanence,” examine the state of transition and decomposition. Made from flat pieces of wood cut into sections at angles, the planes appear to be folding. Wood cutouts and dowel rods create the appearance of hinges. Using plasters and glazes, Brammer achieves the look of weather-beaten and rusting metal. Behind the heavy, decomposing surfaces are expansive seascapes, lending an opposing sense of transparency and lightness. These pieces suggest that everything fixed, solid and supposedly permanent is actually in a natural state of flux. (Mary A. Osborne)