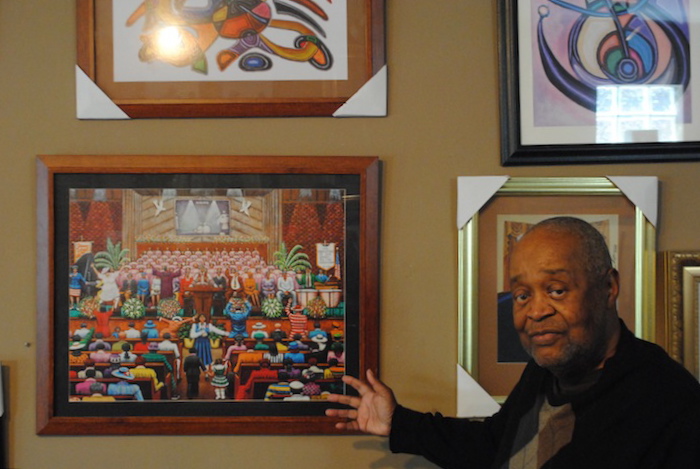 Melvin King’s paintings are pure Americana. It is artwork that tells important stories about black religious worship and the civil-rights movement.

King’s paintings hang from every available space on the walls in his three-story brick house and studio in Burnham. When there is no more wall space, paintings are placed on the floor, where they lean against walls. They also are stacked in boxes, stored under tables and desks or stacked on top of them. Some of the paintings are framed, others are wrapped in plastic. Still others have cardboard packing protectors on each of the frame’s four corners.

In the middle of the kitchen is an easel, where King, a soft-spoken man who is seventy-seven, paints at least three hours a day. He has never been married, and he sleeps in a bedroom off the kitchen.

King is stimulated by an R&B radio station and by television, both of which are often on at the same time. Life on the streets also feeds his imagination. King spends his afternoons driving around the city to get new ideas.

“I don’t know how many paintings I have. More than one-thousand reproductions and originals,” says King, a self-taught artist who has been painting for seventy years. He has worked various jobs, including teaching painting for the Chicago Park District.

“The first time I walked into Melvin’s house, I thought it was awesome. It was like being in an art museum,” says Willie J. Morris, a fellow painter, who has known King for thirty years.

The phone rings and King answers. “Yeah, I am working on two paintings now,” he tells Morris. The paintings were to be sold at the Hyde Park Community Art Fair, held June 1 and 2.

King has worked in several mediums, including oil, pastels, watercolors, wood, clay, metal and acrylics. Pablo Picasso, Paul Klee and Amedeo Modigliani have influenced his work. “They were the first artists I studied because I was attracted to their work,” he says.

Initially, King focused on abstract art. But he later expanded his range, and many of his paintings are influenced by his belief in God, such as “Revival,” which depicts black worshipers, seized by the Holy Spirit, dancing ecstatically in the aisles of a church.

His other works capture important struggles in the civil-rights movement, such as the 1968 “Memphis Sanitation March,” where black men carried signs that read, “I AM A MAN.” There also is the 1963 “March on Washington.” King visited the sites for inspiration.

That is what makes King similar to Norman Rockwell, said Milo Bosh, who runs the local blog Black Artist News. “There’s an overwhelming sense of patriotism and heartfelt compassion in the work of Melvin King,” Bosh explains. “The source of its strength isn’t construction of hyper-enriched details. It’s the psychic infusion of his personal and intimate knowledge of the social, civic and historic events represented in the paintings.” (Frederick H. Lowe)